Final Boss
Zero is the final boss of Kirby's Dream Land 3 who has a huge resemblance to Dark Mind's second and third form. It is a dominant life form that controls Dark Matter. It was initially destroyed, but soon returned as Zero Two in Kirby 64: The Crystal Shards. Along with this counterpart, Zero is considered one of the most gruesome characters in the series.

Although no backstory is given, Zero appears to be an emotion-based entity, seeing as how its weakness is the Love-Love Stick. It is also shown able to produce Dark Matter from its body in the final fight, which suggests his reason for leadership of the Dark Matter, as they are all creations of his powers, even though they have free will. Whether or not Zero is the only source of Dark Matter in the universe is unknown.

Metaphorically speaking, Zero and Zero Two act as reminders that even in such an idyllic world like Dream Land, true evil will always be present.

Zero and Dark Matter are the extra, final bosses in the game. They can only be fought if Kirby has collected all of the Heart Stars. If not, the game simply ends after Kirby defeats the possesed Dedede and an ominous, dreary ending plays. Together, the two evil entities are fought inside the Hyper Zone.

Right after Kirby delivers the final strike to Dark Matter, the screen begins to flash and Zero suddenly appears. Its fighting style is very similar to Dark Matters in the sense that it flies around shooting projectiles at Kirby and attempts to crash into him. In his first form, Zero appears as a giant, round, white sphere, with a small, red eye with a black pupil. It attacks by shooting drops of blood from openings that appear around its eye and launches miniature Dark Matters at Kirby. It is also capable of moving the screen in a frantic matter in an attempt to ram into Kirby, and due to its size, is hard to dodge. Sometimes, Zero flies forward, offscreen, and into the background. When it does, it will begin to deploy more bullets of blood from its eye, which deals a lot of damage if it makes contact with Kirby. When Zero's Life Meter is depleted, the eye will slowly tear itself out of the white body in a bloody and gruesome manner, beginning the final phase of the fight. The eye will then start to circle around Kirby continuously closing in and ramming into him. It has no other means of attacking besides ramming, nor does it have much health, and can be taken down in a short amount of hits.

Once its life meter is depleted, Zero spirals out of control as red blood-like energy erupts from its body and explodes, signifying its defeat. 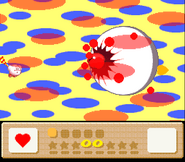 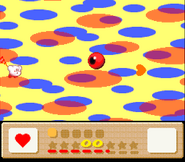 Zero, without his "body".
Add a photo to this gallery

Kirby's Dream Land 3
Add a photo to this gallery
Retrieved from "https://kirby.fandom.com/wiki/Zero?oldid=69105"
Community content is available under CC-BY-SA unless otherwise noted.