Mid-boss
Yuki is a mid-boss that wields the Ice ability. He attacks by throwing snowballs, jumping around, and sometimes knocks his own head off, though he can always grow back his head somehow. Yuki is only vulnerable when he has his head. His head and snowballs are able to be inhaled so that they can be spat back out at him. He only appears in Kirby's Dream Land 3.

Yuki is a creature shaped like a snowman or a big pile of snow with black dot eyes and a small black mouth, which as constantly a surprised face. 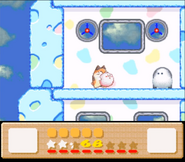