Yogurt Yard is the fifth level in Kirby's Adventure and its remake. It comes after Grape Garden and before Orange Ocean.

Kirby exhaustedly climbs up a tall mountain to grab the Maxim Tomato at the top. When he gets there, he triumphantly holds the tomato above his head but loses his grip and it goes rolling off of the mountain. Kirby tries to chase it but trips and rolls off himself.

This intro is the same in both versions of the game, but in Kirby's Adventure, there was a sign that says "TOP."

Yogurt Yard could be considered the most geographically diverse level in Kirby's Adventure. This is because the level not only takes place on and around an immense mountain, but also deep inside it. Best seen from the cutscenes in Revenge of Meta Knight, Yogurt Yard is large, brown, and pyramid-shaped. It is also shown to have large cascading waterfalls and large red forests as seen in Kirby's Adventure. King Dedede positioned Heavy Mole here during the events of Kirby's Adventure, who serves as the boss. Heavy Mole was responsible for carving out the expansive tunnel systems here before he was destroyed.

Yogurt Yard has a total of six stages and features every sub-game in the game. It has a Crane Fever room (replaced by a Bomb Rally room in the remake), an Egg Catcher room (replaced with an Air Grind room), and a Quick Draw room. It also has a Museum featuring Rocky and Twister, and an Arena featuring Bonkers. 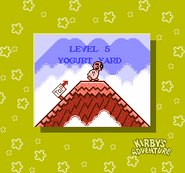 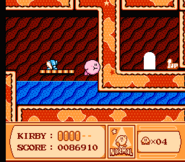 Kirby inside a cave in Kirby's Adventure.

The previous area as seen in the remake.

Kirby in front of a large waterfall. (remake)

Deep in the core of the mountain (remake) 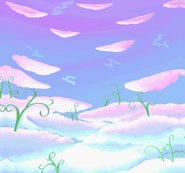 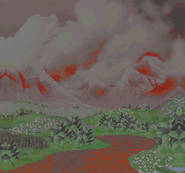