Yin-Yarn is the main antagonist and final boss of Kirby's Epic Yarn and its remake, Kirby's Extra Epic Yarn. He shares the name of the stage he appears in, which follows Castle Dedede and preceeds Meta Melon Isle.

He is an evil sorcerer from the world of Patch Land. He can manipulate most things made of yarn with his pair of wooden knitting needles, which are held in each of his hands. Yin-Yarn's true origins and motives are never revealed throughout the course of the game, and he comes across as a land-hungry villain ultimately seeking control of Dream Land, although he confesses himself that he is not sure what to do with it.

Yin-Yarn's body is made almost entirely out of yarn. He has a button for an eye, along with a black mustache. He has three eyelashes, one yellow and the other two red, and what appears to be a large, purple brow. His mouth is always in a grin, with white strings of yarn representing his teeth. He wears a green hat with a yellow band on his head. He also appears to be wearing an orange poncho with an intertwining red and green design. He wears a green necklace with the stolen magic sock around his neck.

Yin-Yarn's true identity is the two knitting needles he wields, which are actually sentient and are brothers according to his Japanese Cast Description, with his body seemingly only being a disguise. One of the needles has yellow eyes and a single horn, the other has purple eyes and two horns, and also bears a frown.

Metamortex: Tankbot
Initially, Yin-Yarn re-knits Fangora to stop Kirby and Prince Fluff, and then Capamari's second form, along with his Octopeas. Both bosses only require a single hit to defeat, and the strategies with their battles remain the same as before, except Capamari does not use his tentacle surge. 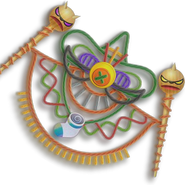 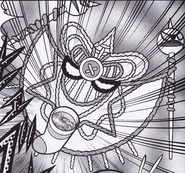 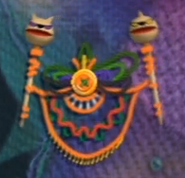