Yellow Kirby is a member of the Kirby species that appears in the Kirby series, debuting in Kirby: Nightmare in Dream Land.

Yellow Kirby was based on the original plan that Kirby would be yellow (as was envisioned by Shigeru Miyamoto). In Kirby & The Amazing Mirror and Kirby: Squeak Squad, the yellow spray paint makes the original Kirby look like Yellow Kirby. Otherwise, he appears in sub-games and the Super Smash Bros. series as an alternate color for Kirby and he is featured as the Kirby (Alt.) trophy, obtained by beating Super Smash Bros. for Wii U’s All-Star mode as Kirby. In multiplayer, Yellow Kirby is usually controlled by player two.

Another Kirby with the same color palette, Keeby, appears in Kirby's Dream Course. Though they look identical, it has not been stated that they are the same character.

While Yellow Kirby himself does not appear in the anime, when Kirby turns yellow when using the Needle Copy Ability, similar to how that ability appears in Kirby: Nightmare in Dream Land, albeit with orange feet.

Kirby & The Amazing Mirror (with Mini)

Kirby's Return to Dream Land (With other Kirbys) 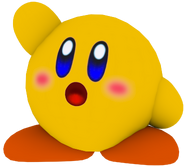