Large Enemy
The Winged Eggers[1] are a group of large enemies in the Kirby series, debuting in Kirby: Triple Deluxe.

A Winged Egger is a squat, yellow-orange dragon with blue eyes and sharp teeth. It wears plates of armor with horns and carries a shield. Its wings are full of tiny holes, presumably battle scars.

The Winged Eggers first appear in Stage 4 of Endless Explosions. When Hypernova Kirby steps foot in their territory, four of them fly out from behind a volcano, smash the bridge, and ambush him. The dragons shield themselves and revolve around Kirby's platform. The dragons regularly stop and one drops its shield, then spits an egg at the hero. To defeat them, Kirby must inhale eggs and spit them at the Winged Eggers one by one. Each dragon is launched into the volcano after one hit.

When one Winged Egger is left, the battle changes slightly. The dragon swoops to the other side and spews fire across the stage. It then spits an egg, repeating the pattern faster.

In Stage 8 of Royal Road, the Winged Eggers are fought again. The defeated dragons are once again found resting at the end of the stage, with casts on their bodies as a result of their last encounter with Kirby. Kirby launches the black Mowlee Bro into them.

The Winged Eggers shield themselves.

A Winged Egger spits an egg.

Kirby launches a Winged Egger into the volcano.

The black Mowlee Bro crashes into the defeated Winged Eggers. 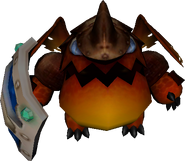 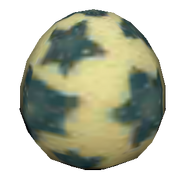