Native American headdress with green-yellow gradient feathery wings and two yellow-white feathers with red tips on each side. In the old games, his rosy cheeks turn into red facial paint.

Wing is one of Kirby's Copy Abilities, debuting in Kirby Super Star.

While Kirby has always had the ability to fly, Wing allows him to do so at a much faster rate. Wing specializes in strengthening Kirby's in-air capabilities and long ranged attacks. Although attacks like Feather Gun can take on enemies from long distances, they still lack power. Wing has issues against bosses, especially in Kirby Super Star, as many of the moves are short-ranged and have laggy endings, usually resulting in being directly on top of the boss and taking damage. However, many of Wing's moves have gained additional power and invincibility in Kirby's Return to Dream Land, making it safer to use against bosses.

Wing utilizes feathers and other such things as means of attacking. However, Kirby's new wings also allow for electricity-themed attacks that can often only be executed in mid-air.

After a long hiatus, Wing returned alongside another ability from Kirby Super Star, Plasma, in Kirby Air Ride. When used, Kirby loses his Air Ride Machine and instead flies along the track on his own. Wing Kirby's maximum ground speed is 28kph, but cannot charge up a boost. The Wing ability only lasts a few seconds in this game. Kirby can still perform the equivalent of the quick-spin attack, only that he spins without a machine. Meta Knight flies using the Wing ability, except it lasts forever. Coincidentally, Meta Knight also can't charge or boost.

Where there is strong wind, Wing is an ideal ability to use, because Kirby can soar through it, something he can't normally do with any other ability.

Meta Knight uses this ability's hover flap in all three Meta Knightmare games, and his has received a few more moves from wing in Kirby's Return to Dream Land onward.

In Kirby Air Ride, Wing can be obtained by inhaling a Flappy in Air Ride mode, gaining it randomly from a Copy Chance Wheel, or by collecting its patch in City Trial and its several of its Stadiums. As it is a copy ability, only Kirby can transform, and not Meta Knight and King Dedede.

While in Wing Form, Kirby has average speed, and is more maneuverable than most Air Ride Machines. However, he cannot charge up or boost, and he is incapable of activating Boost Pads (or other environmental pads). The player can pick fast machines to cover straights and use Wing (or Wheel) to cover sections with turns - this is especially important in checking off several time attack checkboxes. Kirby cannot use his Feather Gun or any other attacks unique to the ability, though he still retains the ability to do a quick spin.

Wing only features once in the anime, in the episode Waste Management. Wing gives Kirby unprecedented speed and maneuverability in the air. His main attack is Feather Gun, which shoots feathers to impale enemies, but he also uses his Condor Head attack. 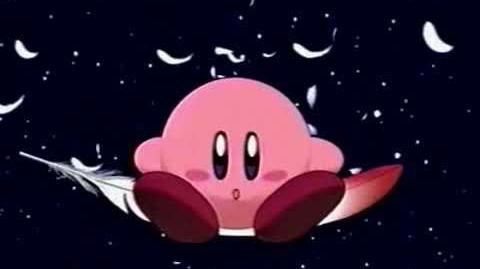 In the transformation sequence, Kirby starts off falling on a feather, which he bounces on for a bit before bouncing again in the air, transforming into Wing Kirby. 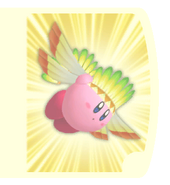 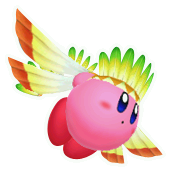 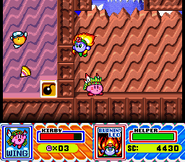 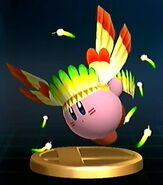 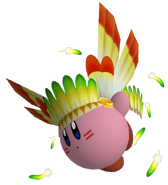 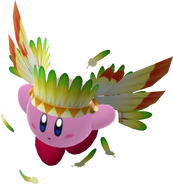