Makiko Ohmoto
White Kirby (called Gray Kirby in Kirby Battle Royale) is a member of the Kirby species that appears in the Kirby series, debuting in Kirby Air Ride.

Like Kirby & The Amazing Mirror, White Kirby does not explicitly appear, but the player can use Spray Paints to color Kirby. In addition to the Chalk and Snow Spray Paints, the former of which now makes Kirby's hat, weapons, etc. grayscale (except when using Metal or Ghost), there is also the added White and Ivory Spray Paints. The White Spray Paint makes Kirby's body and feet white, with no discernible blushes, making him resemble his appearance in Kirby's Dream Land. Ivory gives Kirby an ivory-colored body and brown feet and blushes.

White Kirby appears in the Kirby Fighters sub-game, as well as the expanded eShop game. He is the sixth color option in the game. 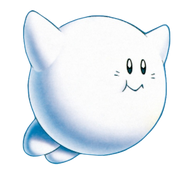 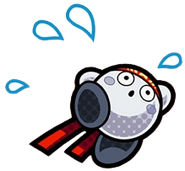 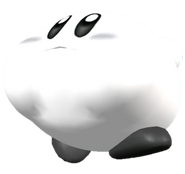