Whispy Woods Land is the first stage shown to the player, but they are not required to play this stage first.

The bottom stage of Whispy Woods Land has a star in the middle with a Big Kabu sitting in the middle of it. A Mumbies floats around the Big Kabu, just over the fades word, "WARP STAR." Two Gordos float near the top corners, where six Kabus line the walls. Finally, three Kirby Triplets exist below the Big Kabu. Rolling over each Kirby Triplet exactly twice will make a Maxim Tomato appear to block the drain.

Hitting the Mumbies once will illuminate a letter of WARP STAR; illuminating all the letters will make Mumbies explode and create a Warp Star, which the player can leave the Pinball Land on. Defeating the six Kabus in the corners will cause the Big Kabu to explode, and his star becomes available. If the player lands where the foe was sitting, an arrow will begin pointing in five directions; the player can use this to fire him/herself up to the middle stage by pressing A with the right timing.

The middle stage has two Gordos hovering near the middle of the screen. Two holes exist in the top corners; if Kirby enters one, he'll come out the other. A large Kirby exists at the top of the screen, with the word, "SLOT," over him, and an arrow pointing at him from below.

The Slot Machine exists below the arrow, with one slot flashing every few seconds. If Kirby hits the big Kirby from below, the one slot that's flashing will change to something random. Rolling over the word "SLOT" will make all three slots change to something random. Lining up a Kirby, a Maxim Tomato, and a star on the slot machine will make a UFO fly out of one hole and into the other. The same UFO will fly out with a Maxim Tomato if the player lines up three Maxim Tomatoes, or a Warp Star if he/she lines up three stars—this Warp Star can take Kirby to the Whispy Woods Bonus Game.

The top stage has three Cappies in the middle of the screen, with a platform above them. On this platform stands a Slippy, who occasionally moves from side to side with an item behind him (either an Apple, an Invincible Candy, a Maxim Tomato, or a Warp Star). On either side of this platform are two fairly-large Kirbys, each holding a Twister. A Bounder clings to each lower wall, and barely moves up and down it.

If Kirby rolls over both Twisters in one shot, they will spin rapidly, create a strange sound, and change the item behind Slippy. If Kirby keeps them spinning long enough, a Maxim Tomato will appear behind the latter enemy, and the sound of Mike from Kirby's Dream Land will sound. If the player has beaten King Dedede, a sprite of Blade Knight will appear in the center of the screen.

If Kirby hits a Cappy, its cap will fly off, but it can get another if the player takes too long in defeating it. If a Cappy is hit while its cap is off, it will be defeated, but it can rise up with its cap back if the player takes too long in defeating the others. If Kirby defeats all three Cappies, Slippy's item will change into a Warp Star. Kirby will have limited time to touch that Warp Star and travel to the boss.

Two Kirbys are controlled by the player's flippers in a breakout-style sub-game. They are to break as many blocks as they can in sixty seconds for points.

The boss of Whispy Woods Land is Whispy Woods. He is stationary, occasionally dropping apples and spitting air puffs to knock Kirby onto the Warp Star, thus sending him back to Whispy Woods Land's top stage. Whispy also drops Gordos that, if not knocked away by Kirby, will paralyze a flipper for a few seconds. Defeating Whispy will grant Kirby a key, which he must pick up to finish his business in the Pinball Land. 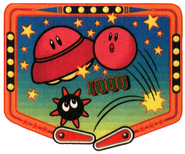