Whispy Woods Jr. is an enemy in Kirby 64: The Crystal Shards. In this game, he appears along with Whispy Woods as the boss of Pop Star. He doesn't have many attacks, but if he touches Kirby, he'll damage him. He can also jump, an ability that Whispy Woods does not possess, and blow air puffs from his mouth to damage Kirby. His card is #2 on page 1/9.

He appears again in Kirby Brawlball of Kirby Mass Attack.

In Kirby 64, Whispy Woods Jr. appears to be a sapling, having only one branch and one leaf. He is portrayed as a beige sapling with one green leaf, big bulgy black eyes, a tiny smiling mouth, two tiny arms and puny feet with which he can maneuver. In Kirby Mass Attack, he looks like a minature version of Whispy Woods, but he has no apples. His relationship to Whispy Woods is unknown, although he most likely came from one of Whispy Woods' seeds from his apples that fall onto the ground, although this is merely speculation. 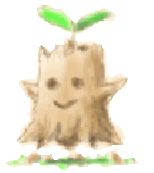 Kirby 64: The Crystal Shards
Add a photo to this gallery
Retrieved from "https://kirby.fandom.com/wiki/Whispy_Woods_Jr.?oldid=125139"
Community content is available under CC-BY-SA unless otherwise noted.