Kirby Wiki
Register
Don't have an account?
Sign In
Advertisement
in: Enemies, Characters, Articles with non-canonical information,
and 2 more
English

Regular Enemy
Whiskers is an enemy in the Kirby series, debuting in Kirby's Dream Land.

Whiskers is a small pink cat-like creature with large shiny eyes. It has two triangular ears and has four clumps of hair on each side. When they fly around, their bodies undulate in a blob motion.

Whiskers serves as the Extra Game equivalent of Kookler, appearing in Bubbly Clouds. It floats around in a circular or triangular motion and inflicts two points of damage when it makes contact with Kirby. Whiskers is faster than its counterpart.

Whiskers also had a small appearance in the anime episode Cowardly Creature.

When Phan Phan escapes, the N.M.E. Sales Guy turns to King Dedede to help return him. Dedede is angry at him, and tells him that he should be ashamed for letting him escape. But the N.M.E. Sales Guy says that he wasn't in his care at the time. He goes on to explain that he was at the "Monster Training School." Whiskers is one of the few monsters to be shown in the training school. It, along with Jukid, is a member of the Star Class, which is the second weakest of the whole school, and is above only the Flower Class. It is shown bouncing on a trampoline. It is not known what becomes of it after eNeMeE is destroyed, neither is it known if it even finishes training school and becomes a full-fledged monster by the end of the series.

In the anime, Whiskers is slightly different having a lighter color and has a worried look to it. 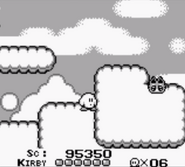