Kirby Wiki
Register
Don't have an account?
Sign In
Advertisement
in: Enemies, Characters, Enemies in Kirby's Return to Dream Land,
and 4 more
English

Whippy is an enemy in the Kirby series, debuting in Kirby's Return to Dream Land. It yields the Whip ability when inhaled.

Whippy is a tiger-like enemy with a long tail and no visible appendages. Has a red crest that looks like a scowl.

Whippy is first introduced in Raisin Ruins, and appears in many subsequent worlds thereafter. It sits in idly one spot, flicking its tail. When Kirby approaches the enemy, it swings its tail around momentarily. After this delay, it aims at the hero and cracks its tail like a whip. Whippy also appears in the Whip Challenge.

In Kirby's Dream Collection Special Edition, Whippy appears in the New Challenge Stages mode, specifically in the Whip and Smash Challenges. Whippy also appears in Kirby: Triple Deluxe, where it behaves the like it does in Kirby's Return to Dream Land.

Only a single Whippy appears in the game, located in Stage 7 of Access Ark. The source of the Whip ability is now greatly attributed to Wester, an enemy that debuted in Kirby: Planet Robobot. 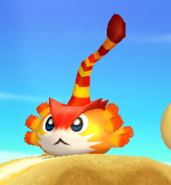