Kirby Wiki
Register
Don't have an account?
Sign In
Advertisement
in: Copy Ability, Articles with non-canonical information, Copy Abilities in Kirby: Right Back at Ya!,
and 14 more
English

Backwards red baseball cap, features white stripes and a winged star at the front of the cap as of Kirby: Triple Deluxe. Transforms into pink/red wheel with a star on the hubcap.

None. in Kirby: Squeak Squad, Fire, Thunder, or Ice depending on terrain. Requires Ability Scroll

Wheel is one of Kirby's Copy Abilities, debuting in Kirby's Adventure.

The Wheel ability is made for getting to places fast and taking out enemies along the way. Normally wearing a backwards red baseball cap, Kirby can turn into a big pink wheel that zooms along the ground, destroying nearly any foe or obstacle and making Kirby almost completely invulnerable - he is susceptible to damage only when turning. An obvious downside to this is that although he is fast and damages enemies on contact, he is very hard to control, especially because he is incapable of jumping in some games. The Wheel ability is best used on flat terrain and in places where projectile-throwing enemies are sparse.

The Helper for this ability is Wheelie. Kirby can board this Helper to become Wheelie Rider, a pseudo-ability that behaves very similar to the regular Wheel ability.

With the Copy Scroll in Kirby: Squeak Squad, whenever Kirby drives over sparks, flames, or ice, he will take on the properties of the element. Ice Wheel can freeze water he rides over, Fire Wheel can burn bushes, and Spark Wheel generates sparks on water and metal. If Kirby is colored using Spray Paint, the Wheel will change to match that color.

In Kirby: Triple Deluxe, Wheel received a charge move which increases Kirby's speed. The ability hat was given extra detail as well; it now has white lines and a star on it.

Wheel is a Mode for Robobot Armor in Kirby: Planet Robobot.

In Kirby's Dream Course, Wheel is an ability to be used with planning and caution, though it has a built-in safety feature that no other ability possesses. When activated, Wheel Kirby will continuously drive in a straight line towards the same direction that regular Kirby was moving, and he cannot be controlled in this form. Sand bunkers and water hazards will be ignored and treated the same as regular terrain. It is a risky ability, as Kirby will not stop before driving off the edge of the course, or stop at all without falling off or hitting something immovable. However, when Wheel Kirby hits a bumper or wall, he will immediately lose all speed, then jump and spin in the air before coming to a rest. This makes it a somewhat safer ability than Burning in Kirby's Dream Course.

In Kirby Air Ride, Wheel can be obtained by inhaling a Wheelie (or Wheelie Bike) in Air Ride mode, or by collecting its patch in City Trial and in several of its Stadiums. As it is a Copy Ability, only Kirby can transform, and not Meta Knight and King Dedede.

While in Wheel Form, Kirby turns into a red wheel with two circles containing a star on both sides. He has above average speed, and is slightly less maneuverable than most Air Ride Machines. The player can pick fast machines to cover straights and use Wheel (or Wing) to cover sections with turns - this is especially important in checking off several time attack checkboxes.

Wheel Kirby appeared in both racing-themed episodes of the anime, where it's naturally the most useful. It keeps the same look, with Kirby turning into a pink tire with a green and yellow hubcab with a yellow star on it, but gains no extra powers - just pure speed. Even when it looks like all is lost, Wheel Kirby can zoom past all opposition. It's his fastest ability after Jet, though he does still get tired after a while. 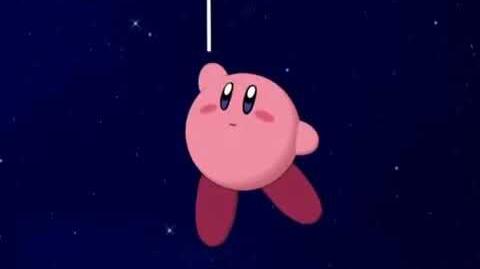 In the transformation sequence, Kirby waves a checkered flag around until a tire hits him and he spins around, then the tire appears on his head where it turns into the red cap, which Kirby adjusts so it's on backwards. 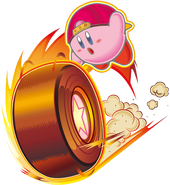 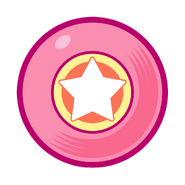 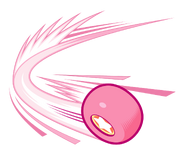 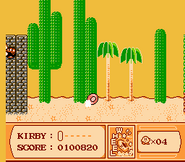 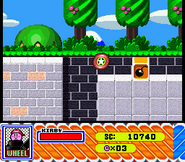