Boss
Wham Bam Rock is the final boss of The Great Cave Offensive (Garden Area), as well as one of the important bosses found in Milky Way Wishes and The Arena from Kirby Super Star and its remake, Kirby Super Star Ultra. He only appears as a face with rocks for hands.

When Wham Bam Rock first appeared, he looked somewhat organic. He had shining yellow eyes, a green gem on his forehead, and a bunch of leaf-like structures atop his head. He had large circular earrings flanking both sides of his face that twirl around slowly. His hands are made of a brown-colored rock, and he had notable thick orange lips.

Many features of his earlier design were recycled into the design of Wham Bam Jewel in Kirby Super Star Ultra.

Wham Bam Rock is capable of performing many dangerous attacks using his rocky hands. He starts off by trying to crush Kirby by having his fist slam down on him. When his hand rises up, it disappears. This attack is repeated three times in a row. After the third smash, Wham Bam Rock snaps his fingers and his hand floats off-screen, letting an avalanche of rocks rain down on Kirby. After the shower, Wham Bam Rock's hands may try to smash Kirby a bit more, have one of his hands lower to try to crush Kirby by grabbing him (this attack can do almost devastating damage if not evaded), attempt to punch Kirby into the opposite wall, and even let the pieces of his fingers fall off as his hand moves across the screen (after taking a decent amount of damage, Wham Bam Rock's fingers may reassemble themselves). His smash attack can also be done by crushing the ground, and moving to another spot of the screen where the same thing happens. His hand can also walk across the ground and flick Kirby across the screen. After taking a decent amount of damage, Wham Bam Rock may attempt to crush Kirby by squashing him with the palm of his hands multiple times.

Wham Bam Rock's name comes from onomatopoeias for the sound of a heavy impact, "wham" and "bam"; and the fact that he is made of rocks. 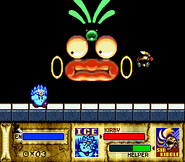 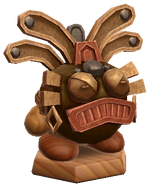