Wester is an enemy in the Kirby series, debuting in Kirby: Planet Robobot. He yields the Whip ability when inhaled.

Wester is a black, orb-like being with yellow eyes, blue feet, and white hands. He wears an orange bandana with a yellow pattern across his face (which covers the lower half of his body) and a red cowboy hat with a brown bond decorated with blue stars on his head. Wester wields a whip similar to Whip Kirby's.

Wester first appears in Stage 1 of Gigabyte Grounds and reappears in many stages thereafter. He walks back and forth across the ground, occasionally stopping to attack if Kirby draws near. He either spins his whip around before cracking it forward or leaps into the air, performing a Whip Tornado.

Wester reappears in Kirby Star Allies as an enemy. He also becomes a friend for the Whip ability.

Wester's name is a shortened form of the word western, a reference to the enemy's design. 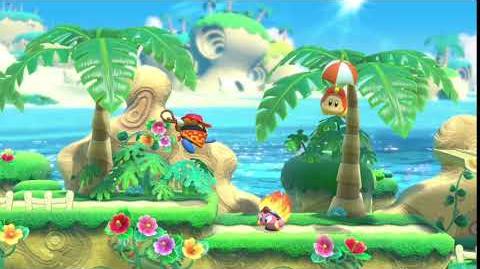 Wester strikes Kirby with its whip.