The Water Gun is used by the Kirby species and a few other characters. It may only be performed underwater; if Kirby is using a Copy Ability that cannot be used underwater, he will perform the Water Gun move instead. The move is a short-range blast of water that may be aimed in one of four directions; up, down, left or right. Depending on the game, the move will either be a one-shot blast or will be an indefinite stream of water/bubbles. The move may not be performed in Kirby 64: The Crystal Shards due to Kirby's ability to inhale underwater in that game; the move also cannot be performed in spinoff titles such as Kirby: Canvas Curse and Kirby's Epic Yarn. In Kirby's Return to Dream Land, Kirby: Triple Deluxe, Kirby: Planet Robobot and Kirby Star Allies, the move can be performed while floating on top of water in an inner tube.

When Kirby is using an Animal Friend other than Kine, the Water Gun move may only be aimed left or right. The Water Copy Ability allows Kirby to use a Water Gun move with a longer range. 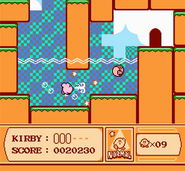 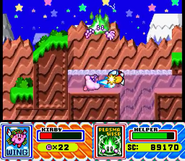 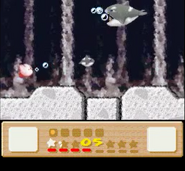 Retrieved from "https://kirby.fandom.com/wiki/Water_Gun?oldid=334502"
Community content is available under CC-BY-SA unless otherwise noted.