Mid-boss
Water Galboros is a mid-boss appearing only in Kirby's Return to Dream Land and Kirby's Dream Collection Special Edition. When defeated, Kirby can inhale it to get the Water ability. It is a colossal version of the standard Water Galbo.

Despite being the larger version of the Water Galbo, Water Galboros has a few major differences in appearance when compared to its smaller counterpart: instead of having similar eyes with white sclera and black pupils, Galboros has sharper, almost cat-like eyes, yellow sclera, red irises, and black pupils. Additionally, it has orange eyelids, three striped markings, and angled spikes (facing downwards) on its back resembling the dorsal fins of a shark. Its snout is somewhat resembles a shark's snout and has small freckles on it.

The EX form of Water Galboros continues to retain its basic shape. At the same time, however, it bears more physical details than before and the tops of its skin have become a different, almost purplish, shade of blue. Its jaw is now red, and its stripes, eyelids, and spikes have tints of red and purple. In addition to alterations in color, Water Galboros EX also has angled spikes that curve upwards.

The Water Galboros, like Water Galbo, can attack using waves of water. It can also jump and shake itself in place, showering the vicinity with water. Another way it attacks is by charging in the direction the player's character is facing towards and running into a wall nearby.

In its EX form, Water Galboros is capable of spitting two shots of water instead of one, and can shake off more water while thrashing around. It is now able to perform small lunges forward as well; being hit by these attacks will cause it to swallow the player's character, forcing him or her to shake the Wii Remote (albeit while the character takes moderate damage). 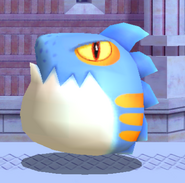