Kirby Wiki
Register
Don't have an account?
Sign In
Advertisement
in: Copy Ability, Articles with cancelled or unreleased content, Copy Abilities in Kirby: Right Back at Ya!,
and 5 more
English

Anime: Golden tiara that spirals up on the center from the right side, holding a central cresting wave. Kirby turns a translucent blue color.

Games: Gold crown with a golden drop-shaped ornament on the center with two small golden waves on each side, holding a vortex of water similar to Tornado.

Water is one of Kirby's Copy Abilities. It first appeared in Kirby: Right Back at Ya!, but it also appeared in Kirby's Return to Dream Land, and in Kirby Star Allies, making it the second anime-exclusive ability to cross into the games, the first being Kabuki.

Water's first appearance is in Kirby: Right Back at Ya!, along with Top, Iron and Baton. All four appear in the episode Air-Ride-in-Style - Part II, and were all created by fans in a contest in Japan to decide on new ideas for Kirby to defeat the enemies.

Water (or a very similar ability) was originally going to appear in Kirby GCN, its first appearance in a video game. It would have looked similar to the design in Kirby: Right Back at Ya! with shiny blue skin, except with a different crown housing what appears to be flowing water. Only one of its attacks was shown: Kirby blows bubbles that spread around a fairly short distance, similar to the later-revealed Bubble. However, the game was never released.

Water wasn't introduced to the games until Kirby's Return to Dream Land. It was first revealed in the game's teaser in Nintendo's quarterly investor report video, then later in the game's E3 2011 trailer where Water Kirby is seen battling a boss. Water Kirby's appearance in Kirby's Return to Dream Land lacks the translucency and blue tone from the anime, but his cap otherwise looks like the unreleased one from Kirby GCN with a larger size and more detail. He also cannot simply inhale seawater to get it like he did in the anime.

Water returns in Kirby Star Allies; it remains relatively the same, although water is more photo-realistic. It is also an element that can be combined with other Copy Abilities to create Friend Abilities.

In Kirby: Right Back at Ya!, Water Kirby was a fanmade ability submitted in a contest in Japan to feature in the anime.

Water Kirby's body changes to a translucent blue gel, with a golden tiara containing a cresting wave on his head. Naturally, Water Kirby attacks by spitting geysers of water to blast the enemy away. 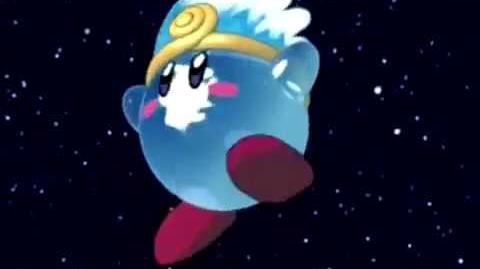 Kirby Right Back at Ya Hoshi no Kaabii - Water Transformation

In the transformation sequence, Kirby spins around in a water tornado. His skin then turns translucent blue, and he gains a golden crown. 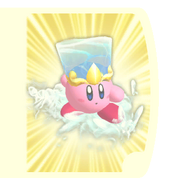 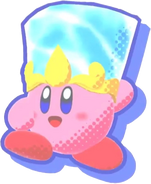 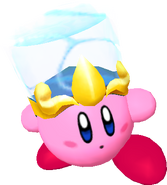