The Warp Star (sometimes spelled Warpstar, called shooting stars[1] in Kirby's Pinball Land) is a glowing, yellow, star-shaped vehicle based off of a shooting star. It serves as Kirby's primary mode of transportation in the series, allowing him to travel quickly between areas.

Warp Stars fly their riders quickly through the sky, and can be steered by thought alone, often expelling stardust behind them as they go and making a whirring noise. Kirby is a very accomplished flyer of Warp Stars; however, he isn't very good at landing them and has a tendency to violently crash land, sending him flying and destroying his Warp Star in the process.

In most games, grabbing a Warp Star automatically takes Kirby to the next section of a level; though sometimes they are optional and take Kirby to secret areas, or simply provide a faster (and safer) way to travel between areas. In other games, however, opportunities arise for the flight of Warp Stars to be controlled more directly in various ways.

Warp Stars can be found floating in many games' levels. Once Kirby touches one, he will automatically fly it to another area. While riding a Warp Star is sometimes optional, it is usually advisable to catch a ride on one.

The Warp Star appears once in each stage in the game (including Mt. Dedede, where Kirby boards it in the stage intro to get into Dedede's castle). Boarding it results in a short cutscene of Kirby flying it to the next part of the level.

The Warp Star allows Kirby to travel from course to course and hole to hole.

Kirby rides his Warp Star as part of the game's intro.

The Warp Star allows Kirby to travel between each of the Rainbow Islands.

Warp Stars appear in various levels in the game, allowing Kirby to change locations as need be. All but four Warp Stars in the game are mandatory to ride; the Warp Stars located in the Garden Area and on Halfmoon are completely optional, only being used for convenience. The Warp Star allows Kirby to travel between each of the stars in Milky Way Wishes.

Kirby flies away on the Warp Star when a round is cleared.

The Warp Star allows Kirby to travel between each of the levels.

If the player obtains all of the Crystal Shards and defeats Miracle Matter, the Darkness Calls cutscene plays, during which Kirby calls his Warp Star in order to fly to Dark Star.

The Warp Star allows Kirby to travel between each of the levels.

The Warp Star appears as an Air Ride Machine in Kirby Air Ride. It is initially the only machine available to Kirby in Air Ride mode. It has the most balanced stats out of all machines in the game and has no quirks, making it user-friendly and a viable choice for the beginning and average player. When skillfully controlled, the Warp Star becomes a fierce competitor since it can utilize almost every trick present in each Air Ride course.

Different models of Warp Star, the Flight Warp Star and Compact Star, are available in City Trial, but the former can only be used in Free Ride mode.

Warp Stars appear in certain locations, taking the player to later Areas in the game. Using a Warp Star is required in order to reach Candy Constellation. Kirby also uses the Warp Star in Goal Games. By pressing the L button, Kirby can use his Cell Phone to call a Warp Star to take him back to Central Circle or to call other Kirbys to his location. Kirby also rides the Warp Star, and is able to fire star-shaped projectiles, when fighting Dark Mind's final form.

The Warp Star makes an appearance as one of the objects drawn by Paint Roller in the Paint Panic sub-game.

Warp Stars appear in various stages in the game, allowing Kirby to change locations as need be.

The Warp Star allows Kirby to travel between each of the Popopo Islands. However, until the player collects all of the Rainbow Medals and unlocks Necro Nebula, the player's Kirbys are reduced to 1 upon flying to a different island, as all but one fall off during the ride.

Warp Stars appear in some of the game's stages. A Warp Star appears in each Level Map, taking the player to the World Map, which allows Kirby to travel between each of the planet's levels and the Lor Starcutter. In the sub-games The Arena and The True Arena, players can also use the Warp Star to go from the starting Copy Ability Room into the first boss battle.

In addition to normal Warp Stars, which occasionally appear in some of the game's stages, 3D Warp Stars frequently appear, allowing the player to change planes. Like doors, the star in the middle serves to communicate to the player whether it is a one-way trip or if it can be used to go back and forth between planes.

Like in Kirby's Return to Dream Land, a Warp Star also appears in each Level Map in Kirby: Planet Robobot, taking the player to the World Map, which allows Kirby to travel between each of the game's levels. A Warp Star is also used to access the Ability Testing Area.

Warp Stars also appear in the Kirby 3D Rumble sub-game, taking Kirby to the next stage in a level.

The Warp Star appears in the game's credits.

The Warp Star is used by Kirby and Bandana Waddle Dee in the game's intro sequence.

The Warp Star is used to navigate across the World of Miracles - Planet Popstar and Far-Flung - Starlight Heroes Level Maps. 3D Warp Stars are also present on the Fortress of Shadows - Jambastion Level Map.

The Warp Star is used to navigate across the World Maps, as well as Isolated Isles: Forgo Dreams area.

In Kirby: Right Back at Ya!, there is only one Warp Star. According to Meta Knight it is the source of Kirby's power, however, because of his age and inexperience, Kirby cannot summon it himself. Tiff, because of her connection to Kirby, becomes the Warp Star's keeper and summons it on his behalf. When not in use the Warp Star shrinks down to the size of a small medallion.

Kirby initially keeps the Warp Star in a small box inside of his starship, after Kirby's starship is shot down by King Dedede Tiff hides the Warp Star inside the wise statue, Kabu. In the later stages of the anime's run, Nightmare Enterprises manages to badly damage the Warp Star and Kabu reveals that he was initially built as a safehouse for use by the Star Warriors and is capable of making repairs to the Warp Star.

They eventually find the Warp Star's hiding place in Kabu, which Nightmare's Destroya promptly attacks, but Kirby is able to defend Kabu using the Crash ability. In its final appearance, Tiff summoned the Warp Star in Kirby's dreams to help fight Nightmare, but instead of riding it, Kirby inhaled it, giving him the Star Rod ability.

In the Super Smash Bros. series, Kirby's stage intro is flying in on his Warp Star and crashing into the stage like a shooting star.

Starting with Super Smash Bros. Melee, Warp Stars are also items that fighters can use. When grabbed, its rider flies off the top of the screen, then comes crashing down soon after, causing an explosion. The explosion does damage and sends opponents flying. The Warp Star's impact location can be controlled slightly to track players who try to avoid it, and in Super Smash Bros. Ultimate, the player can also delay the Warp Star's landing to trick opponents.

The Warp Star appears twice in the Subspace Emissary, both times summoned by Kirby to escape the explosion of a Subspace Bomb. The first time, he summons it to escape the Midair Stadium with either Peach or Zelda in tow, only to be knocked off of it by the pursuing Battleship Halberd, causing Kirby and Peach/Zelda to land on its deck. Later on, after Kirby joins Mario, Pit, Yoshi, and Link, he uses the Warp Star once again to aid Link and Pit in escaping another Subspace Bomb.

In Super Smash Bros. for Nintendo 3DS and Wii U, the Warp Star makes its Kirby Super Star Ultra sound effects as it takes off.

The Warp Star is the symbol used to represent characters from the Kirby franchise. 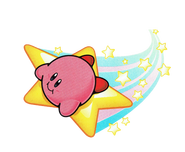 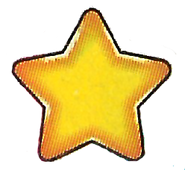 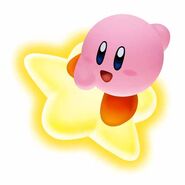 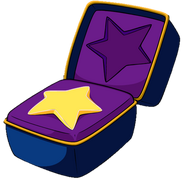 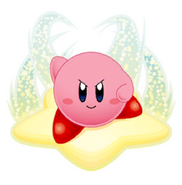 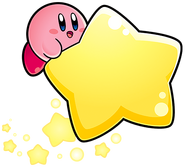 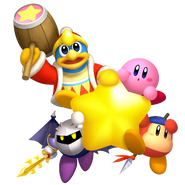 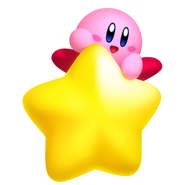 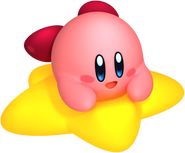 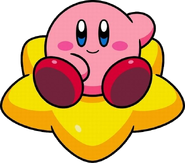 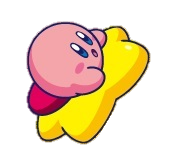 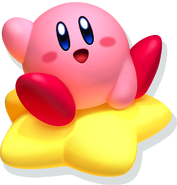 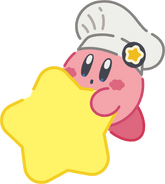 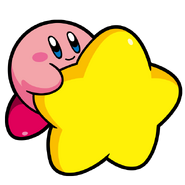 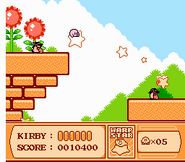 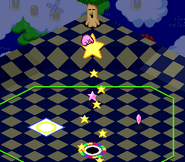 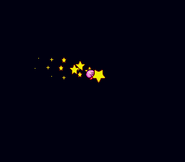 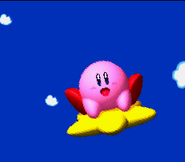 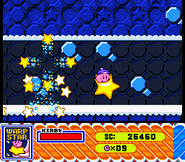 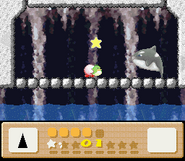 A chain of Kirbys takes off on the Warp Star. 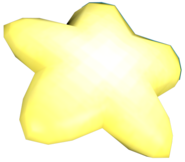 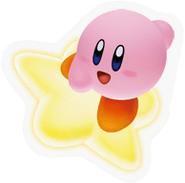 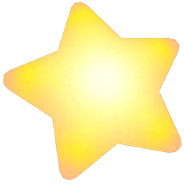 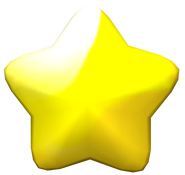 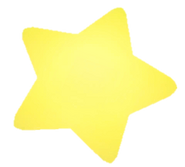