Regular Enemy
Wapod is an enemy in the Kirby series, debuting in Kirby's Dream Land 3.

It looks like a ghost-like Waddle Dee with a tail in place of its feet. In Kirby's Dream Land 3 they have two small arms but in Kirby's Return to Dream Land it has no visible arms.

In Kirby's Dream Land 3, the jar Wapod lives in comes in two different sizes (normal and thin) and is brown with a tan and red pattern adorning its middle section, resembling a round-bottom flask. In Kirby's Return to Dream Land, this jar's shape becomes like that of an Erlenmeyer flask; its top is now tan and its bottom half takes on a reddish hue.

This game marks Wapod's first appearance. If Kirby approaches its jar, a Wapod will emerge from it in the manner of a genie from a lamp. Once it is out of its jar, it will wag its tail in place. However, it will not do anything else and will simply hover as long as Kirby remains near. When one Wapod is defeated, another will come out from the same jar and take its place, so Kirby has to break the jar to defeat it for good.

In Kirby's Return to Dream Land, Wapod appears in a few stages. They have changed in this game; they will now float high into the sky, rather than staying just above their jars. Multiple Wapods can emerge from one jar. In this game, one can find a name for Wapod's pot inside the coding of the game; these pots are called Wapod Pods.

Wapod's name seems to be a combination of "Waddle Dee" and "pod." 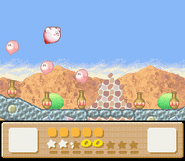