Walky is a regular enemy in the Kirby series. He is a living, sentient microphone that can't carry a tune for his life. He is designed to look like a traditional stage microphone. Because he is hinged between his two halves, he is able to fire out amplified sound waves. He commonly attacks by shouting a terrible cacophony as it creates three colorful music notes that can harm Kirby. He is the only regular enemy in the Kirby series that yields the Mike ability when inhaled.

In Kirby's Dream Land, a predecessor of Walky known as the Mike appears as a useful item. Kirby can inhale or touch it to put it in his mouth. Upon spitting it out, Kirby emits a blast of sound that defeats all enemies on screen. The Microphone is the basis for the Mike ability that would appear in subsequent games.

According to Walky's trophy in English versions of Super Smash Bros. Brawl, he first appeared in Kirby's Dream Land. However, the Japanese version states that he first appeared in Kirby's Adventure. Additionally, NTSC versions of the trophy state that the debut game was on Game Boy, while the PAL version changes it to NES. This suggests that the Japanese version is correct, and the PAL version misinterpreted the mistake in the English localization.

While Walky doesn't appear in his usual form in either Kirby's Adventure or its remake, Paint Roller draws a microphone that greatly resembles Walky as one of his drawings. He simply walks in Kirby's direction until he walks off-screen. When inhaled, he grants the Mike ability. The Walky-like microphone rarely gets drawn, likely because use of the Mike ability will cause Paint Roller to be defeated much more easily.

Kirby Super Star was first to use a truly-personified microphone for Walky's design (one that wasn't an enchanted drawing). It is also the first game to use Walky's current design and name.

Walky will rarely show up in stages, strolling about. Occasionally, he stops to cry out a terrible tune. This sends forth three bad notes, one straight forth and the others diagonally forward. On rare occasions, Walky will yell out the tune, but will fail to spit out note projectiles, causing him to nervously run back and forth, jumping around. He once again grants the Mike ability when swallowed.

Walky appears as an obstacle in this game. He is seen singing quietly to himself on the track, doing nothing to harm Kirby. When inhaled, he gives the Mike ability just like in the other games. In Top Ride, Walky is used on pickup rather than using suction to get him.

Walky behaves identically to his Kirby Super Star counterpart (except for the aforementioned occasional attack failure). Just like before, Walky will keep to himself and walk around peacefully until approached. He will fire out three multicolored note projectiles when Kirby draws near. Once swallowed, Kirby can acquire the Mike ability from him.

Walky behaves much like he did in Kirby's Return to Dream Land. When the room is divided among two planes, two of the enemy's notes travel straight forward while one fires off into the background (or foreground, if Walky is positioned in the background). The enemy can be seen tilting his head back when firing notes, something he hasn't done in any other game.

In Kirby Star Allies, Walky behaves similarly as in previous games. If hit with a friend heart, it will become an ability item instead of a friend.

Walky appears as a monster sent by Nightmare Enterprises to King Dedede in the episode Abusement Park. The N.M.E. Sales Guy suggests (somewhat jokingly) to hold a Karaoke contest with it, the grand prize being Kirby's favorite food, Watermelons. Kirby would stand on the "stage" (actually the NME Teleporter) and be sent to NME to be destroyed by the overwhelming numbers of monsters there. Engrossed in the idea, King Dedede also invites the rest of Cappy Town to participate, promising the second-place winner millions of Dedede Dollars.

The town is ecstatic and rushes off to compete. After several attempts to get on to the "stage" and sing (his attempts denied by Mayor Len Blustergas, Chef Kawasaki, and Sir Ebrum to name a few) Kirby inhaled Walky and becomes Mike Kirby. Kirby then proceeds to sing badly, and N.M.E. Sales Guy (unaware of Mike Kirby's powers) sends him straight to NME. Kirby's bad singing destroys all the monsters and the N.M.E. Sales Guy is forced to send him back to Dream Land. By the time Kirby finishes singing and forfeits his ability (just like in the games), he has destroyed all of Castle Dedede. In the end, Kirby wants to sing again, but Walky, who apparently survived the inhalation, has had enough and runs away.

Walky has no attack of his own and simply acts like a regular microphone. As the N.M.E. Sales Guy explains to Dedede, Walky is a monster who simply amplifies the voice of the person talking into it.

Walky is named after the walkie-talkie, alternatively spelled "walky-talky," a type of portable communication device. 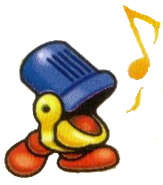 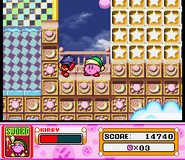 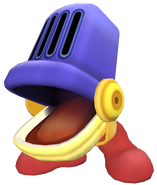 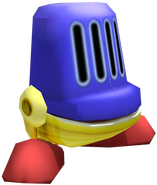 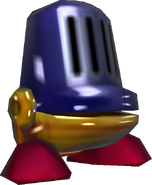