In any mode other than Free Run, reach the goal a total of 3 times

The Wagon Star is an Air Ride Machine in Kirby Air Ride. Its shape resembles a wagon or truck, as the name suggests, and it is covered in decals with designs based on traditional Japanese artwork, as well as two tassels hanging on the back and front. There is a ladder on the back that would presumably assist the rider in climbing on, though it is purely cosmetic, and there is no unique boarding animation for when a Kirby climbs onto the Wagon Star. It has two rear headlights, which leave square-shaped glowing trails behind it in the air as it travels forward. The Wagon Star is known for not being able to charge, and for being the only Air Ride Machine that is able to survive a single hit from the Hydra's attack.

The Wagon Star has excellent acceleration and handling (it has the second best handling in the game, behind only the Jet Star and tied with the Compact Star), and above-average Top Speed. It can neither charge nor boost, however, and has poor Glide. 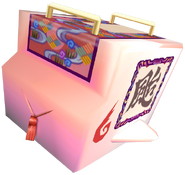 Kirby Air Ride
Add a photo to this gallery
Retrieved from "https://kirby.fandom.com/wiki/Wagon_Star?oldid=324564"
Community content is available under CC-BY-SA unless otherwise noted.