Boss
Waddle Tank is a boss in the Kirby series, debuting in Kirby's Return to Dream Land.

The Waddle Tank appears to be designed to look much like a Waddle Dee: It is a large orange construct with two short arms, a tan face, and two brown eyes. Notably, the Waddle Tank also has a white and red parasol attached to the top of its head, as well as a face on its back inspired by Waddle Doo, complete with two hair-like metal bars. As implied by its name, the Waddle Tank also features a tank-like bottom half.

Beneath its exterior lies a metallic skeleton. Underneath its face is a metal grill and a goggle-like piece is located directly under where its eyes are. A spring connects and holds the Waddle Tank's head to its base.

The Waddle Tank appears as the boss of Mission 1 in the Scope Shot sub-game. He is the easiest of the three bosses that appear in the sub-game.

During the battle, the Waddle Tank will move around and rotate its head, leaving tracks behind it. After a while, it will turn around and charge up a Mega Laser from its back; if Kirby does not shoot its cannon with several shots (or one charged shot), Waddle Tank will blast the pink puff, stunning him for a few seconds. When one of its parts is destroyed, it will either spin its head wildly around or it will be blown back by the shock of the hit. When the tank's vitality is fully depleted, it will explode and the mission will be completed. 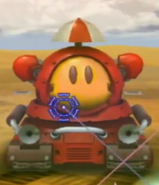 The battle with the Waddle Tank begins. 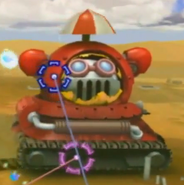 The Waddle Tank with its face destroyed 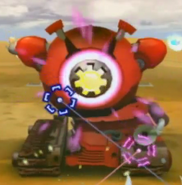 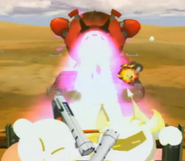 The Waddle Tank about to explode

The Waddle Tank is destroyed.
Add a photo to this gallery
Retrieved from "https://kirby.fandom.com/wiki/Waddle_Tank?oldid=344025"
Community content is available under CC-BY-SA unless otherwise noted.