Waddle Doos are common enemies in the Kirby series. They are cycloptic variants of Waddle Dee that fire energy whips from their eye to attack. If Kirby inhales one, he gets the Beam ability.

Beside from their beam, they have largely the same behavior as a Waddle Dee. Sometimes, like a Waddle Dee, they can be seen floating down from the sky with a parasol, and if Kirby eats one with a parasol, he will get the Parasol ability instead of Beam.

Waddle Doos are similar in appearance to Waddle Dees. They are round, light-coral-colored creatures with stubby arms, light orange feet, and one large eye protruding from the middle of their heads. Above their eye is two strands of hair. Their color could be red, orange, gray, green, turquoise, etc. They have no mouths, but in Kirby: Right Back at Ya!, King Dedede's lone Waddle Doo servant can speak, and is the only one who can communicate with the Waddle Dees.

In this game, Waddle Doo always brandishes a green Parasol. It is the only enemy who can grant the Parasol ability to Kirby in the game. Waddle Doos have green feet in this title, a characteristic that had only been previously seen in game manuals.

Waddle Doo is the third opponent faced and represents the end of easy mode. He's mad at Kirby for beating Waddle Dee at Avalanche.

Interestingly, this game states that he and Waddle Dee are cousins. This is not stated in other Kirby games.

Waddle Doo returned as a foe, a minion of Kracko, and an ally as the Beam Helper. The helper version is red, and when under computer control, Waddle Doo largely approaches enemies and slowly attacks them with beam whips after partially charging while jumping. He can also perform Beam Whip underwater, albeit with shorter range. Waddle Doo is the first enemy seen in Spring Breeze. Waddle Doo is also the first opponent Kirby duels in the sub-game Samurai Kirby. Waddle Doo has 18 hit points. One Waddle Doo takes on the Helper to Hero challenge; this Waddle Doo is a very pale green with a blue pupil. Waddle Doos also can be released from both forms of Kracko and the evil villain Kracko's Revenge. Waddle Doo's Beam Whip goes through guards.

Waddle Doo makes a surprise appearance in Kirby 64: The Crystal Shards, being fought as a mid-boss at the end of the first stage of the game. When a Waddle Dee finds a Crystal Shard, Dark Matter appears and possesses the Waddle Dee, turning him into a Waddle Doo.

This Waddle Doo cannot shoot out beams, perhaps because it is simply a fusion of Waddle Dee and Dark Matter (or just for practicality reasons due to the absence of the Beam ability), or Waddle Dee may be violently confused and the Dark Matter possessing him may be unable to attack properly. However, this Waddle Doo possesses a set of attacks never used by Waddle Doos before, each of which relying heavily on brute force. For one attack, he'll run towards Kirby in an attempt to grab him. If Kirby avoids this, he trips, producing a star, and remains dazed and motionless for a few seconds (a perfect opportunity to attack him), and cries. For his second attack, he will try to leap onto him and crush him. If he misses, he falls flat on his face (this time producing two stars), and once again is left open to attack. As for his third attack, he vigorously dashes across to the other side of the screen. When he hits the end, he will produce another star, and stumble around dizzily for a bit. Each of these moves are easy enough to predict and are easily avoidable. They also all provide stars to attack the Waddle Doo if Kirby doesn't already have an ability.

After Waddle Doo is defeated, he reverts to Waddle Dee and becomes Kirby's ally.

Waddle Doo appears the same way in both of these games. Its attacks do not differ from other games, firing a simple Beam Whip. Waddle Doo's attack is noticeably much slower in these games than in previous series installments. It first appears in Cookie Country. A variant called Super Waddle Doo also exists. There is also a larger, more powerful Waddle Doo known as King Doo that appears as a mid-boss. It is first fought in Stage 3 of Raisin Ruins.

Waddle Doo appears in the New Challenge Stages in Kirby's Dream Collection Special Edition as well. It appears in the Parasol Challenge (wielding a Parasol), as well as the Smash Combat Chamber and Magolor Race 1.

Waddle Doo appears exactly as he does in Kirby's Return to Dream Land. However, Waddle Doo now attacks more often, firing its Beam Whip at regular intervals rather than waiting for Kirby to come close to it. In these games, some Waddle Doos do not fire Beam Whips, running around very quickly instead.

A Waddle Doo appears in the intro of this game, alongside a Broom Hatter and Cappy. He has his color drained when Claycia steals Planet Popstar's colors and is rendered immobile for the rest of the game. He also appears as a collectible figurine.

A Waddle Doo also appears as an audience member in the Crazy Theater mode.

Waddle Doo returns in Kirby Star Allies, as both a regular enemy and as the friend for Beam.

In Kirby: Right Back at Ya!, Waddle Doo is one of King Dedede's minions. This certain Waddle Doo seems to be in charge of the innumerable Waddle Dees that are under King Dedede's command, and can summon all of them to rush to his aid. He can speak, despite having no mouth, and is also multilingual, being able to translate the Waddle Dees' language. This skill was mostly shown in Tourist Trap, when King Dedede wanted to turn Dream Land into a tourist attraction (Waddle Doo was able to translate for the tourists). Unlike in the games this Waddle Doo never fires beams from his eyes, although he never really had a reason to do so. He is not hostile towards Kirby and treats him pleasantly when not around King Dedede. This specific Waddle Doo makes a surprise appearance in Kirby Mass Attack, namely in Kirby Quest. Distinguished by his sword, he appears alongside Escargoon, Dedede, and numerous Waddle Dees as one of King Dedede's attacks. In the Japanese version of the anime, Captain Waddle Doo had a high voice, whereas in the English dub, he was given a lower voice.

This Waddle Doo also cares greatly for the Waddle Dees, as shown in multiple episodes. In Hunger Struck, he gives a plea to King Dedede to change the food, but when he refuses, he leaves angrily and grumbles that "he's gonna get it." When the Waddle Dees riot, he supports their riot and gets food in the castle for them. When Fryclops feeds the hungry Waddle Dees, he tells him that they are in his debt. In Waddle While You Work, when King Dedede sold all of his Waddle Dees to pay off a debt from Nightmare Enterprises, Waddle Doo leaves the castle as he had no one to order around. He also seems to give them lots of food, as he gave them a feast and once ordered 2,000 steak sandwiches for them. 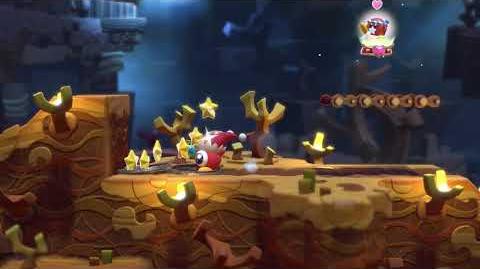 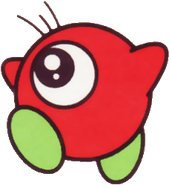 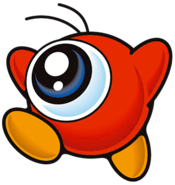 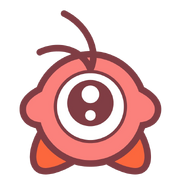 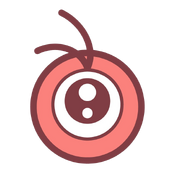 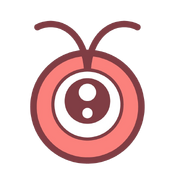 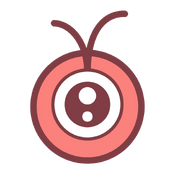 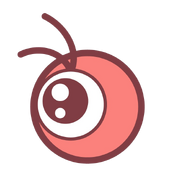 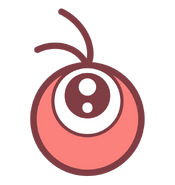 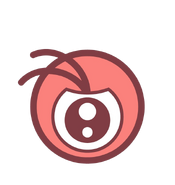 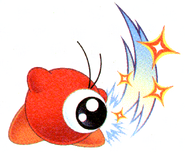 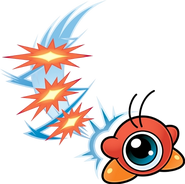 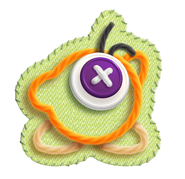 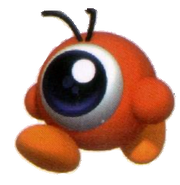 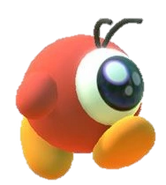 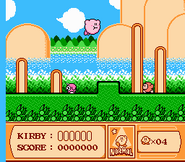 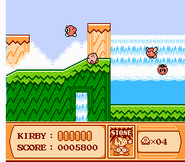 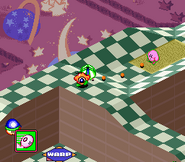 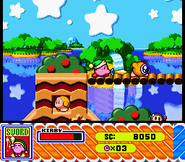 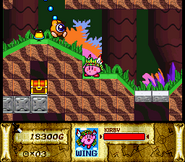 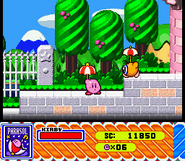 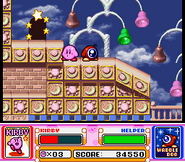 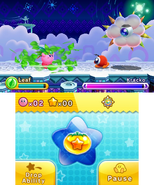 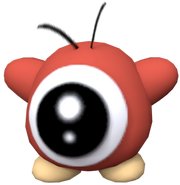 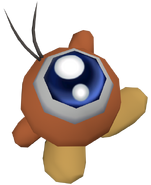 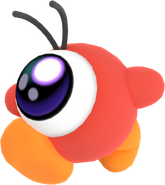 Kirby Super Star
Add a photo to this gallery
Retrieved from "https://kirby.fandom.com/wiki/Waddle_Doo?oldid=313801"
Community content is available under CC-BY-SA unless otherwise noted.