Regular enemy
Volm is an enemy in the Kirby series, debuting in Kirby Super Star. In Kirby: Planet Robobot, it yields the Bomb ability.

Volm appears inside Galactic Nova with Pata and Dacooga enemies. Volm moves around walls, floors, and ceilings. It shoots small, flashing bullets when Kirby's Starship approaches. The enemy explodes when hit with one shot.

When Kirby enters Star Dream Soul OS, the Mother Computer's heart fires Patas, Dacoogas, and Volms. They explode on impact. This is the only game in the series in which Kirby can inhale Volm. 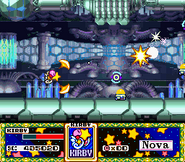