Kirby Wiki
Register
Don't have an account?
Sign In
Advertisement
in: Articles with non-canonical information, Enemies, Characters,
and 22 more
English

Void, titled as Astral Birth, is a boss appearing in Kirby Star Allies. He is the final boss of The Ultimate Choice on the Soul Melter EX difficulty, replacing both Void Termina's final phase and Void Soul.

Void is a spherical entity, similar to Void Termina's inner core and Void Soul. His body is now white and less reflective, with rainbow-colored veins pulsing throughout it. His Dark Matter form now has a blood-red eye, making Void appear similar to an old enemy.

Void is a celestial and mysterious being that is described in numerous books, namely the book of legend. Void is omnipresent, as he exists in infinite dimensions in different forms. According to the book of legend, depending on the energy gathered, Void could be brought into existence in a variety of forms, each being infinitely stronger than the last. One such form is Void Termina, which was reincarnated from darkness and negative energy. In the Japanese version of Void Termina's second phase’s Soul Melter EX description, it is implied that Void was created from the combination of all chaos and possibilities, Dream, Dark, Soul, and Heart, in a substance of sorts. It is also stated that he was born as “the progenitor of origination." Seeing a radiant form of his that resembled a star, the ancients, people of the past who made legendary treasures and pieces of technology, transcribed his mysteries into the aforementioned books, as well as possibly the book of legend. According to the book of legend, Void Termina's originator, the Jamba Heart, which apparently came from a dimensional rift,[1] was producing darkness, and was trapped in a seal by four heroes of yore using spears of the heart. Afterwards, the four heroes mysteriously vanished and were never seen again.

In the present time, Hyness had founded the Jambastion Religion, which worships Void and considers him to be a god. He founded the religion based on a vision he had, in which a god was speaking to him, inviting him to a new and peaceful land. He believed that Void was this very god, due to his vision matching with the book of legend’s writing about Void. The very same Jamba Heart that was sealed by the four heroes was somehow obtained by the Jambastion Religion, as it was the vessel Void would descend from and give his benevolence, as told in the book of legend, and Hyness wanted to resurrect Void as Void Termina by breaking the seal on the vessel so he can use his power to restore his clan. However, after Hyness became obsessed with worshipping him and taking revenge, his goal changed to using Void Termina’s power to destroy the multiverse to avenge his clan. Hyness proceeds to attempt to break the seal and resurrect Void, but did not fully understand how to break the seal, and accidentally shatters the Jamba Heart, sending its shards across the galaxy. The religion had gathered most of the shards, but after Hyness is defeated by Kirby and friends, he sacrifices himself and The Three Mage-Sisters, successfully completing the Jamba Heart and reviving Void, who reincarnates into Void Termina, due to the negative energy that was gathered. However, Void Termina was later vanquished by Kirby and friends.

Void begins his battle by firing energy pellets around him, similarly to his previous incarnation, but this time he fires many more pellets and immediately follows up by firing laser beams in a circular pattern from his body. His cutter attack is also more threatening, as he moves much more quickly while performing it. When he launches the cutters for the third time, he will shoot many cutters wildly around himself in a manner resembling one of Drawcia Soul's attacks.

Like Void Soul, Void can summon purple liquid. However, he does not electrify it; rather, Void utilizes it while jumping around, making it difficult to dodge the attack. He will then split himself into four copies (which share their health bar), all of which retreat into the background so they can bounce around the room and jump onto the foreground, just like Void Soul. Instead of jumping onto the foreground one at a time, though, they will jump in two at a time. After this move, Void and his clones float to the foreground and use a needle attack identical to that of Miracle Matter, doing this at the top and bottom of the arena before reforming into one being.

Eventually, Void will begin to use moves reminiscent of those from previous final bosses in the Kirby series. Void grows in size and begins to rotate glowing, mirror-like projections around his body, similarly to Dark Mind’s second form. He will then rotate 90 degrees and fire a laser at the projections, which reflect the beam around the arena; the laser reflects about seven times, and can be avoided by crouching. After this, Void grows slightly larger and becomes a glowing ball, similar to one of Drawcia Soul and Soul of Sectonia's attacks. He will sweep from left to right, right to left, left to right diagonally, and then right to left diagonally before finally attempting to ram into Kirby from the background, this attack changes the background to a fierier scheme.

After these attacks, Void will use his laser attacks; he swoops in from the sides of the screen in a much larger arc, causing the lasers to take up more space. Three orbs will be created at the top of the arena, and three more will be created at surface level, each firing a damaging laser. To evade the beams, the player(s) must quickly move to the top or bottom of the arena or behind the lasers. After that, he will then fire beams from the background, which rotate around the foreground. They cannot be blocked, much like Void Soul's lasers. After that, Void then replicates another of Dark Mind's attacks, rotating his mirror-like projections in a figure-8 pattern while moving downward and then firing a laser at the projections again. After this, he will move into the background and begin sweeping across the screen once again, this time, changing up his pattern. He dashes down the right side of the arena, then speeds upward from the middle, and then he dashes down the left side of the arena.

If the battle is still continuing at this point, Void will continuously use the same three attack patterns (the Dark Mind-esque attacks, the Drawcia Soul/Soul of Sectonia-esque attacks, and the Dark Matter-esque attacks) until he is defeated. It should be noted that Void's laser beam pattern will change three additional times and will get more difficult to evade if he is still alive.

The battle with Void is non-canon, as it takes place during a non-canon sub-game. However, Void’s existence, affiliation with the ancients, the Jambastion Religion worshipping him, and his reincarnation into Void Termina are indeed canon.

Void fires lasers around his body.

The final blow is dealt upon Void. 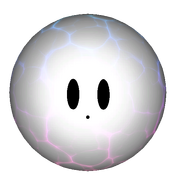