Vividria is a mid-boss in the Kirby series, debuting in Kirby Star Allies. She yields the Artist ability when inhaled.

Vividria has maroon skin and blonde hair, of which it is put up in a ponytail with two bands, separating the hair into two sections. The second section has paint on it, resembling a paintbrush, and on her head is a red beret, similar to Artist Kirby's, but clean. She also sports a pink dress with yellow trimmings and a blue ribbon. She also sports a green overcoat.

Her alternate palette found in later levels of the game turns her hair white, as is the stripe around the bottom of her cloak. Her beret remains red, and her tie, overcoat, and eyes turn the same color, while her skin and coat turn pitch black. When she's a helper, her beret gains splatters of paint on it as well as a star emblem, and depending on which player she is, she may gain a new color palette that is near monotone yellow, blue, or green.

Vividria debuts in this game, where she is fought as a mid-boss. She also serves as the friend for the Artist ability.

In her mid-boss battle, Vividria mainly attacks using her artist skills. She can bring out her canvas and will paint one of three paintings: three bombs with parachutes, which float down from the air and explode on impact, Sawyer, which moves across the ground in one direction and harms the player on contact, and Kracko, which floats across the air and fires lightning at the ground. Vividria can also bring out a stone and make a sculpture out of it. She'll either make a fist, which she uses to try and flatten the player by smashing it onto them, or a Greek-style statue of Susie, which she uses very similarly to the fist, except it doesn't flatten the player. Another one of her attacks include Vividria following a player, and after long enough, she rains down paint on them. She also has a few physical attacks as well, such as floating to a nearby player with her hair raised, in which she then swings her hair at them. This attack also splashes small waves of paint, which increases the range of the attack by a bit. When at half health, she will swing her hair four times instead of twice. She can also charge in an arch while swinging her hair, damaging anyone in her way.

In her stronger version, Vividria now creates two paintings at a time instead of one. She can swing her hair four times immediately, and she now tilts the paint rain to the sides to get anyone near the attack. She uses her fist sculpture differently, as she instead aims the fist at a player, and then sends it flying at them. She also swings her Susie sculpture at set areas instead of where a player is at. She now charges in an arch twice instead of once as well.

Vividria seems to be a combination of "vivid," meaning colorful, and the female suffix "-ia", found on other art-based enemies, like Drawcia and Claycia (along with Paintra's Japanese name). 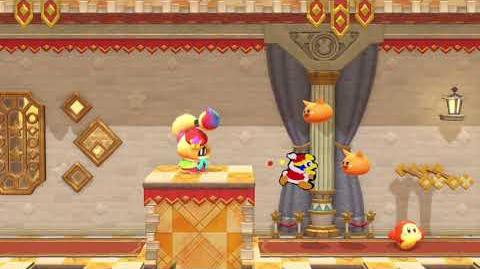 Vividria creates a statue of Susie.

Vividria paints a miniature version of Kracko as an attack.

Kirby Star Allies (Twin Vividria)
Add a photo to this gallery
Retrieved from "https://kirby.fandom.com/wiki/Vividria?oldid=319638"
Community content is available under CC-BY-SA unless otherwise noted.