Kirby Wiki
Register
Don't have an account?
Sign In
Advertisement
in: Articles with non-canonical information, Enemies, Characters,
and 3 more
English

Venom Kracko is a boss in the Kirby series, debuting in Super Kirby Clash. It is a poisonous variant of Kracko.

Venom Kracko's body consists of a magenta cloud with a green and yellow outline and twelve black spikes with lavender stripes and hot pink tips. It has an eye with a purple sclera, yellow iris, and a black, slit-like pupil. When furious, its iris turns red, and so do the stripes on its spikes.

Venom Kracko has most of its moves taken directly from Kracko, although some have minor alterations. It can dash in an arch, along the ground, from one corner to the other, or sway up and down, damaging anyone on contact. It can rain down on the player, and will slowly follow them when doing so. It can create two beams of electricity that revolutionize around it, as well as firing a lightning bolt below it while moving along the ground. It can also dump various objects from its body onto anyone below it, however, these objects are covered in poison, and it releases a poisonous cloud of gas alongside them.

When furious, it can create a giant orb of electricity and fire it to the center of the foreground, where it explodes into four smaller orbs that fall onto the ground. When dashing back in from the background, Venom Kracko creates two poisonous clouds of gas that move outward from the center along the ground. Another attack involving it going into the background is when it shoots four streams of electric orbs at a time along the ground, finishing off with two streams that move from the corners to the center. It can shoot two lightning bolts at the sides of the arena, two at the top and bottom, two at the bottom left and top right corners, and two at the bottom right and top left corners. Lastly, it can enlarge its body to become a gigantic thundercloud that takes up part of the top of the battlefield. It will then rain down an immense amount of lightning on anyone below it. 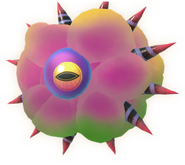