Venog is an enemy in the Kirby series, debuting in Kirby: Planet Robobot. It yields the Poison ability when inhaled.

Venog is a cyan and blue blob. It has the face of a toad with yellow eyes and slitted pupils. The enemy has no limbs.

Venog first appears in Stage 3 of Resolution Road and reappears in many stages thereafter. It creeps across the ground in short strides, occasionally stopping to attack if Kirby draws near. It either spits a blob of poisonous goo from its mouth or shakes its body wildly, throwing blobs of goo in several directions. If a blob of goo hits the ground, it forms a hazardous puddle that remains for a few seconds.

Venog is able to spit goo across planes with a sharper aim than it would have otherwise.

Venog is a portmanteau of "venom" and "frog," referring to both Venog’s poisonous attacks and its somewhat frog-like appearance.

Venog spits goo at Ninja Kirby from the background. 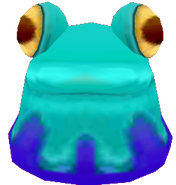