Vegetable Valley is the first level of Kirby's Adventure and its remake. It comes before Ice Cream Island. The V inits name comes from the term "violet", another term for the color purple.

The intro to Vegetable Valley changes slightly from Kirby's Adventure to its remake, Kirby: Nightmare in Dream Land, but both are generally the same; both involve Kirby having a conflict with a Blade Knight in a wooded area.

In the original game, Kirby is having a showdown with a Blade Knight. Kirby parries most of his attacks but his blade gets knocked away. Kirby inhales and eats Blade Knight for the Sword ability before he gets pushed off the platform.

In Kirby: Nightmare in Dream Land, Blade Knight is advancing towards Kirby on a large wooden platform. Just as Kirby is about to fall down, he swiftly inhales and eats him to get the Sword ability. Kirby also encounters Blade Knight at the Museum, which may be a reference to this intro.

Vegetable Valley consists of only 4 normal stages, each of which are rather short. Vegetable Valley is a rather simplistic level that takes place predominantly in a fertile grassy valley with lakes and plains seen in the distance of some stages, although it also contains caverns (and some mountains) as part of its setting. Stage 4 is set in a vast forest and up in the wooded treetops. The level introduces some of Kirby's most basic abilities like Fire, Spark, and Sword. Whispy Woods makes his home in the level's forest, and acts as the game's first boss.

It has a Crane Fever room (replaced by a Bomb Rally room in the remake), as well as a Museum featuring Blade Knight (who bestows Kirby the Sword ability when eaten).

In the second stage, the player can view Star Blocks arranged in a fashion that spells out HAL, which also contains a single Broom Hatter. To do so, the player must enter the second stage and make his/her way near the Warp Star. By waiting enough time (and by going backwards to get the Warp Star out of view) to erase the warp star from the memory, the Warp Star disappears and Kirby can move forward to the area with the HAL logo spelled out.

Even though the area remains in the remake, it has become inaccessible due to the increased calculation ability of GBA and thus impossible to make the warp star disappear.

This HAL area can also be accessed on the Virtual Console version of Kirby's Adventure as well as in the original NES version.

A similar trick can be achieved in Illusion Islands, in the Revenge of the King sub-game of Kirby Super Star Ultra.

There is a hidden room with a UFO inside in the first stage. In the second area of 1-1, there is a series of four blocks at the first waterfall in the level - The first block is different from the rest. Have Kirby float underneath and press ↑ on the +Control Pad to reveal a hidden door, and he'll be taken into the room with a UFO.

The UFO room is still available in Kirby: Nightmare in Dream Land, but the hidden door is more easily seen as it is depicted as a dark area underneath the first block. In the original Kirby's Adventure, the door is not noticeable apart from the different Star Block which covers it.

In the second area of stage 1-4 in Kirby: Planet Robobot, there is a secret area that is likely a reference to Vegetable Valley's UFO room, as it is entered in a similar fashion. Like in Kirby's Adventure, the door is not noticeable. Inside that secret area, there is one of the five Smash Bros. ability locations. 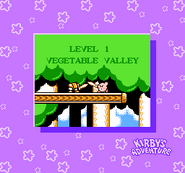 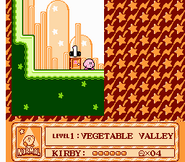 The Level Map in Kirby's Adventure 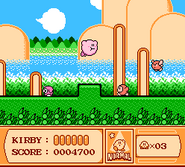 The first stage of Kirby's Adventure

Flying high with the use of a Warp Star (remake)

Surrounded by enemies on the leafy forest floor (remake)

Some budding trees beside a lake (remake)