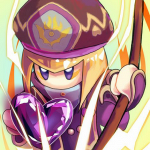 Welcome Tails41yoshi, and thank you for your edit to Talk:Kirby Wiki!

We are glad to have you on the team! This is a wiki dedicated to real articles on subjects related to Kirby and the series bearing his namesake.

If you wish to help, Portal: Help Out is just the place for you. You should also have a look at the Editor's Manual - our customized guide to a smooth experience at Kirby Wiki as well as style and content guidelines for articles and other pages.

If there's anything you're unsure of, feel free to ask your fellow editors or a site administrator.

You know, when I didn't have a YouTube account I saw your profile on videos, and here you are on the wikia, your the first guy that I know on YouTube AND Wikia. Lol.

Let's talk this out. We'll do it here; I don't want to add more to the thread as is, as it's an RP, not a discussion on game strategy. Iqskirby

They are powerful. They're the weapon of choice for Boss Battles on Hard Mode; I've seen it done. But what about the other things? Its value, its stars and modifiers. Iqskirby

What's going on with chapter 4? And for 9, are you using the treasures, or your own weapon of choice? Iqskirby

I haven't had the biggest problem with 9.0 on chapter 9, aside from the occasional act of stupidity. The Tempura Wizard (and Eggplant Wizard as well) is meaningless if you have effect recovery on you, which for lvl 1 gives you 3 status cures. I've even beaten Medusa without taking damage. Add for the RP, I understand you guys are having fun, and I don't really want to ruin it. Again, you guys could continue it on another wiki. I used to Kirby RP as well. It resulted in my first "relationship," although, sadly, it was also my last. I haven't had one ever since, and I doubt I'll be able to get another one through the same means. Iqskirby

Then what's the issue with killing the handoras? You can dodge, can't you? Also, a fan game? Don't mean to be pessimistic, but I have my doubts. Iqskirby

Well, here's something to look at. Leveling up Super Armor increases the amount of times you can use it. With Aries armor, you can only use it two times, but the ability itself is better per level. You may also want to consider simply getting a better weapon. You're still an orange gem. Iqskirby

Notice the RP? Is it really of that caliber? Iqskirby

How old are you? Iqskirby

And I'm 17, and probably, on a technical standpoint, more insane than you, given what mental conditions I have. Iqskirby

I have autism. Asperger's to be exact, aka autistic psychopathy. I do have my moments of lack of emotion, and sometimes I know how I should feel, but I don't. Iqskirby

I'm not a fan. Not simply because it's offensive to make fun of a mental disorder, but also because they probably don't even know what autism is. Iqskirby

Not really a fan of today's society. You actually in Germany? Iqskirby

Well I know you're not German. Anyway, yep. I can care less about some of the numerous memes and slang. As for it, I'm in the United States, and it's my first election year, and the two candidates, to put it bluntly, suck. Iqskirby

Cavebob is on/off with me, I liked Pacha edits, but they seem to have faded out. I don't care for dat boi or various other ones. I also don't care about salty and lit, especially the latter. It sounds incredibly lame. Iqskirby

So, what Kirby dream/fan games have come to your insane mind? Iqskirby

You said you had a bazillion and 402 ideas and you betray me now? Iqskirby

It's been forever since I watched that Let's Play. Well, I definitely have a few of my own ideas. Iqskirby

I see what you mean. I want to be a Let's Player, but haven't gotten to it. I most certainly have my own bag of gags. Iqskirby

I see. Get back to it. Stop stalling. Your viewers need you. Iqskirby

Getting 100% on that game was hard. I basically cheated on that. On Kawasaki's mini-game, I would hear the sound, press the wii home button, write the sound down, "unpause," hear the next sound, and continue process. Boss Butch is on its own legitimately difficult. Jump is... well.... Iqskirby

Well, he's doing Shantae (no, I haven't subscribed; just using my resources). So, regarding the Kirby games I've thought of, there's a sequel to Kirby Air Ride, a Meta Knight game (that hopefully doesn't take same the route as Shadow the edgy Edgehog), a Kirby's Dream Land 2 [HD] remake, and, yes, even a game which includes my own character as playable. I haven't directly revealed him to you, but you've probably seen him. Iqskirby

I didn't mean guns, but sure. The Air Ride sequel idea I had has been going on for 5 years or so, so it first started during the Wii. At this point, NX I guess. As for KDL2, I decided a remake for that given that it's old. KDL has been remade as Spring Breeze, twice (3 times if Revenge of the King). KA has Nightmare in Dream Land. Super Star has Ultra, and KDL3 is good as is (it's pencil graphics anyway). Even Kirby 64 looks good; Kirby looks round, and this is a 64 game we're talking about. So, who's my OC? Iqskirby

Realize that Normal Mode only gives you a 6.0 bonus, but an over 9.0 experience. Seriously. Gaol will only use the laser attack on her chapter at 8.0 and up as far as I'm concerned, and it's not often, and it's slow. In boss battles, she spams it, and it's fast, and can cover 90°. Iqskirby

Bihm Masheen Gahn! 15:58, July 8, 2016 (UTC)
She also uses it on Easy, mostly if you're far away. Speaking of Gaol, I still remember when I was trying to do Normal or Hard Mode, with my Flintlock Staff, and I tried doing a get-up shot, which then hit her reflect barrier which she put up at the very last second, which killed me when I had like, 40% of my health... Reflected Flintlock Staff charged shots are THE WORST. Tails41yoshi (talk) 16:01, July 8, 2016 (UTC)

Of course they are. Those shots are brutal at distance. Most powerful in the game, but of course they're circumstantial, and has the weakest melee, with Artillery being a close second. Iqskirby

I see. Guess Gaol just has a lot of bulk. Iqskirby

If you ever need some thread comments deleted, I will do. Iqskirby

Yes, blocking is effectively banning someone from the wiki. Iqskirby

The content of your videos display an uncannily similar personality between you and another friend of mine. I'm almost inclined to believe you're the same person, but know it's not true because your username would be different and you'd have already confirmed this to me. Iqskirby

Tell the other guys.

You've been posting a lot of pictures, and it's actually starting to become a problem. Aside from the crude content in some of them (profanity and the likes), and what could technically be considered spamming with how many times I see screenshots of a chat, usually containing shipping comments, this is going to need to stop. If you have a picture you want to share, please don't put it on here, exceptions being if it's strictly Kirby-related. Just post them somewhere else and post hyperlinks to their locations instead. Are we cool? Iqskirby

Retrieved from "https://kirby.fandom.com/wiki/User_talk:Tails41yoshi?oldid=236206"
Community content is available under CC-BY-SA unless otherwise noted.