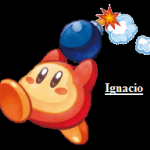 Just so you know, enemies like Bonkers or Star Block Waddle Dee are called mid-bosses, not mini-bosses.--Starman125

(Permalink) He's being polite to ask you to stick to the wiki's convention of referring to them as mid-bosses. Using both everywhere is needlessly confusing to people not aware of the fact.Changtau2005

The rule is basically confirmed by Kirby Super Star Ultra; the mid-boss endurances are called the Mid-Boss All Stars.--Starman125

Retrieved from "https://kirby.fandom.com/wiki/User_talk:Ignasozu7?oldid=125498"
Community content is available under CC-BY-SA unless otherwise noted.