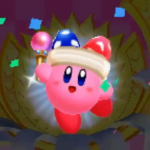 Hey there. This is my user page for the Kirby Wiki, and it looks like you have somehow found your way here. Well then, nice to meet you!

I got into the Kirby franchise only about two years ago, so to be blunt, I'm a bit of a "nooby" when it comes to the games. I first got into this wonderful little series of games when I played the game Kirby: Nightmare in Dreamland. I ended up loving the game, so I played some more games in the Kirby franchise, as well as marathon most of the anime, and I've been a fan ever since.

Favorites and least favorites in the Kirby franchise

Some more stuff about me that's not about Kirby

I like vidya games! If I listed every video game I like on the face of the planet I'd be here all day, so we'll just skip all that.

Other than that, I'm interested in programming and the likes. I've never programmed a game before, but I am interested in doing so. I may program one sometime in the future...

Back to (commercial) video games; here's a list of every game console I own as of writing this:

Xbox 360 --I don't have Xbox Live yet though and the console is mainly shared with my brother, though I still use it often. Sorry I can't meet up with anyone on there though...

Wii U --I still need to get games for it.

Nintendo Miiverse (for Wii U and 3DS)

Retrieved from "https://kirby.fandom.com/wiki/User:Skelly11?oldid=331492"
Community content is available under CC-BY-SA unless otherwise noted.