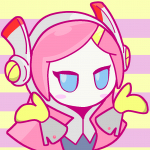 My workshop, but don't go there unless you're me.

Hiya! Welcome to my user page. I'm an admin here, obviously, so if you'd like to discuss something, please leave a message on my talk page.

I've been here since about 2012, but got into the Kirby series around 2011 when my friend let me borrow SSBB (and then never asked for it back). It was there I stumbled upon the demo for Kirby's Adventure. I was hooked. From there, I went to play KSS, and then KRtDL, and... well, so on, so forth.

What I usually do around here is chatting away or simple patrolling, but I'm cool with that. I'm more of a low-key admin 'round here. I try to help out where I can, if I can, though. If something's wrong, whether there's an issue on the Discussions or somewhere else, let me know and I'll see to it that it gets resolved, either through me or another admin.

I'm twenty-two. I like to, y'know, draw, write, play video games. The usual sort of thing. I like Undertale and a few other series/things that have awful reputations (amongst their fanbases at least), but I usually don't talk about them too much. Don't worry, I'm not going to obnoxiously screech "sans undertale is Kirby" randomly. Maybe.

I like pretty much any food. Like, pizza. But not brussel sprouts. Those are pretty bad. Anyway. I've got a few consoles, like the Nintendo Switch and 3DS. I've got an Xbox One as well, so I like to think of myself as pretty well-rounded. Not too focused on one particular company for their consoles.

I'm also a semi-decent artist sometimes?, but then again I've been drawing since about 2005. It wasn't really until the last few years where I've started to try and discover my own style and began to experiment with new angles and... hands. Which, let me tell ya... they're totally painful to draw. Surprisingly, I got into MLP a few years back. Learning to draw little horses was a lot more difficult than some might imagine, and that alone was probably what helped boost my talent a little. Or at the very least gave it a kickstart. But recently I've been drawing on and off, not getting much practice in. Oh well.

Hey, music is also pretty neat. I don't really have a specific genre I prefer, y'know? Catchy songs are always good. Also, here's a free tip! If you're drawing, listening to music can be beneficial while doing so, because it can provide some serious inspiration. You've just gotta be listening to the right stuff; you can't draw a serious picture listening to the, I dunno, Teletubbies theme song. Well, I think some people could. Also limit the distractions around you...! It's hard to draw when people keep talking to you, or you keep playing Solitaire on your phone.

Whenever it's in my own power, I'd like to help people. I'm a good listener, and fairly understanding, so if you ever have anything you wanna get off your chest, I'm here for ya.

Got any burning questions about the Kirby series? Not sure why Magolor has an eye that looks like Zero? Or perhaps you're confused about the Sparkling Stars. I can help you with that! I usually stay up late every night, mostly doing daily post-midnight sweeps so none of us have to wake up to a user deleting the entire Wiki.

I'm a little jokey at times. But I should warn you, my jokes... well they're pretty bad. And corny. But that's okay, I think? Anyway. Sometimes I can be super apologetic. And other times I can be sorta really sarcastic. Just know that if it seems like I'm being rude or mean to 'ya, I don't mean it.

I've done a lot of things. Written a few stories, drawn a lot of things; well that makes sense. Thirteen years of doing this tends to start adding up. I used to pretty much only draw on paper and pencil, but now I'm sticking with digital stuff. It's sorta like a phase. Sometimes I'm only doing paper and pencil and no digital, or vice versa. I think it changes every few years. Anyway, here's like a short synopsis of this old old Kirby comic I drew as a kid back in 2011-2014 (looking back the plot is super non-sensical but for some reason I'm still proud of it)

Kirby Comics I-XV: Kirby, along with Dedede, Meta Knight, and Bandana Waddle Dee share adventures across Pop Star and a cast of new characters. New foes arrive in the form of Olive, a strange Batamon, and during the final moments of the series, 0² returns. In this series, the events of K64 never unfolded. (XI-XV Comics were never actually drawn, but I did have the story all planned out.)

Now that you've absorbed all the above information, yes, I have a life beyond the Wikia. Don't worry.

Did I already say I liked to draw, play video games, and write stories? Well, not so much that last one, at least not recently.

Life is so exciting.

(Not arranged in any particular order)

3. "Not sure what I'll do with it, but I'll figure something out!" Yin Yarn: KEY

4. "He has become <insert power> Kirby!" Meta Knight: Kirby: Right Back At Ya!

7. "I'll just take those medals off of you..." Daroach: Kirby Mass Attack

8. "How did HE get here!?" Customer Service: Kirby: Right Back At Ya! Fright to the Finish.

9. "I do believe I've been star struck!" King Dedede: Kirby: Right Back At Ya! Kirby comes to Cappy Town.

Kirby Games I own, and Opinions

Original characters. Yep. I have those, too. Boy, I'm so original. Anywho. I'll just name off the prominent ones. I have a few other ones, some relating to the Kirby series and some not.

Olive: A Batamon that hails from the planet "Star Pop". Originally Meta Knight's pupil, he grew to despise his Master. He eventually fled Popstar and resorted to absorbing Dark Matter to increase his strength. The process corrupted him for quite some time, before having it purged by Kirby and co. After this event, he displayed aggression towards any manifestation of Dark Matter. He perished after being possessed by 0² and being slain by his former apprentice. Secondary antagonist of Kirby Comics I-IX.

Meta Kirby: The Mirror World counterpart of Olive. Originally a light-hearted, jolly individual, his soul suffered corruption when Olive absorbed Dark Matter. He escaped the Mirror World and sought out Olive, and when he found him, he became his pupil. While the two committed crimes and villainy all across Pop Star, they were forced to band together with Kirby and co. when 0² arrived with his army on Pop Star. During the assault, he was forced to vanquish his former Master. Tertiary Antagonist of Kirby Comics III-IX.

Inspiration: Seeing on how most characters had a mirror-world counterpart of themselves, I decided to give Olive his own. His designs and overall backstory changed the most between any other character of mine. In essence, I feel as if Meta Kirby is my only "pure" OC; He isn't based off of anyone that currently exists in the Kirby lore. I named him prior to creating this Wikia account.

See you around the Kirby Wikia!

Because I'm too lazy to make a workshop, this is my workshop where I work on things. Please try your hardest to refrain from editing these things. Though if anything happens to be here and you tweaked with it, I guess I'll be able to see what you changed by viewing the history. Still, tell me about what you did via my talk page or Discord. Thanks!

Retrieved from "https://kirby.fandom.com/wiki/User:Meta_Kirby52?oldid=318133"
Community content is available under CC-BY-SA unless otherwise noted.