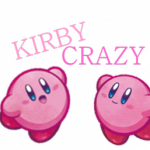 Let's say that I'm a little crazy. Okay, very crazy. And not just over Kirby. I like other characters too, like Meta Knight (who doesn't?).

If I don't have someting to do that makes me go crazy, then I go insane (yeah, I'm weird that way).

I like Kirby, and I play a lot of nintendo, but, Warning: I'm not a big fan of Mario.

There's not a lot to say about me. Good Day to you! :D

I started playing Kirby games a long time ago. My Dad is sooo old, he still has a NES, and I'm surprised it still works. At first, my siblings and I looked through all the games, and since we didn't know how to read yet, we just pulled out random games and played them.

And I pulled out Kirby's Adventure, and before I knew it, we played that instead of all the other countless games my dad had. Of course, we didn't know it was Kirby, and just enjoyed eating enemies.

Then my dad found the anime and we watched that too. But that happened when I was about...7 or so. I don't remember. And then I forgot about it for a couple years (I don't know how that was possible).

Until I was looking up Halloween pictures, and so happened to stumble upon a Kirby picture. I then used it for presentations in school, and I became quickly known as "Kirby Crazy".

Then, for another project, my friend wanted to know more about Kirby. So then I searched up Kirby on the web, and found the anime on Youtube. That triggered even more. After all that, I kept searching around, and I found Kirby Wikia. So glad I did. It's pretty awesome, and I got caught up with all the Kirby facts, even though I continue to learn more.

I ove to play Kirby games, even though my siblings are always completing it faster than me. Hey, it's the fun in playing it that counts, right?

As of now, I just try to tidy up articles around the wiki, and search up random pictures of Kirby and Meta Knight. And play the games of course.

In fact, since I got the Dream Collection for Christmas, I now have:

I have also played Kirby Mass Attack and watched the Anime - Kirby: Right Back at Ya!

P.S. If you really want to know about me, like a stalker, I have an email, and of course, I'm not giving it to you.

Other than being crazy and insane, I somehow settle down and read and write. I'm wrting a book, and trying to make a series (yeah...watch it fail) and I've stolen a lot of ideas from Kirby....(and other books).

Retrieved from "https://kirby.fandom.com/wiki/User:Kirbycrazy24.7?oldid=154615"
Community content is available under CC-BY-SA unless otherwise noted.