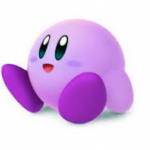 Hello! You've found my profile page! It looks pretty plain right now (like, borderline empty), but I'll find something to put here...eventually. You can think of me as one those over-the-top Kirby fangirls with tons and tons of Kirby fan art littered around my place and some merchandise here and there. Seriously, ask me what I did yesterday and I probably wouldn't even remember; ask me what an enemy's name in a Kirby game is, however, and I could answer you in a few seconds.

Here's a list of Kirby games I've played so far, in order:

As you can see, I've played just about all of them! The only ones I'm missing are Kirby's Super Star Stacker (Japan-only), Kirby's Tilt and Tumble (I'll probably need an emulator), and the Satellaview/BS-X games (ditto).

I'm pretty interested in glitches, especially the ones that cause graphical madness or other weird things, so I tend to test out a lot of the glitches on the Glitch page just for fun. (That's why I keep changing it - always finding new stuff to put in!)

You're also looking at the page of a self-proclaimed Grammar Policewoman, so don't be surprised to find me tidying up the grammar for a page.

Retrieved from "https://kirby.fandom.com/wiki/User:KirbyFan97?oldid=208065"
Community content is available under CC-BY-SA unless otherwise noted.