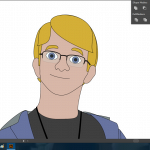 Hello!!! I am a user who thinks knows Waddle Dees are awesome. I think the courses in Kirby: Air Ride are actually located on the planets surrounding Popstar (in Kirby 64 and Milky Way Wishes). My favorite Copy Ability is Suplex. My favorite helpers are Chilly, Rocky, Bugzzy, and (guess who!) My favorite Mix Ability in Kirby 64 is Refrigerator. I am J-Yoshi64 on Super Mario Wiki.

The following Kirbies are guys my brother and I made up. They are on a team and hail ﻿from Popstar's neighboring planets. Their meeting-place strongly resembles City Trial. They also have helpers on their team (some of which aren't even helpers in the games!) They exist in the world of the Kirby anime

Cold Kirby is a Sapphire-colored Kirby who is a expert on using ice-based copy abilities. He is native to Shiver Star and calls Frozen Hillside his home. You would normally see him wearing an Ice Bomb cap. His tried and true Air Ride Machine is a Wheelie Scooter with a built-in Ice Wheel that can also glide. He's also skilled at Suplex moves. But not as skilled as Bugzzy! His best friends are Crispy Kirby, Chilly, and Parasol Waddle Dee. Then again, all of my characters are good friends with Parasol Waddle Dee!

Crispy Kirby is a Kirby with a crispy yellow color. He is best at firey abilities, which sparks a rivalry between him and Ocean Kirby. Crispy is from Neo Star, more specifically, Magma Flows. He sports the Burning cap from Nightmare in Dreamland. His Air Ride Machine is the Jet Star. He really does care for his younger brother Extra-Crispy Kirby, although he can't help but join the others in teasing him for his dim-wittedness. Crispy has an obvious crush on Emerald Kirby, further increasing the rivalry between him and Ocean Kirby. His best friends are Cold Kirby, Burnin' Leo, Extra-Crispy Kirby, Electric-Lime Kirby, Parasol Waddle Dee, and (he'll never admit it) Ocean Kirby. The reason Crispy Kirby is crispy is because one time he accidentally wound up directly behind a fully-charged Rocket Star. Ouch....

Emerald Kirby, as her name states, is an emerald-colored Kirby. She is the guardian of the forest. Emerald Kirby is expert at every type of martial arts in the book (whatever "the book" is). She is swift, graceful, and stealthy. Beyond these attributes, however, is her gentle and kind-hearted personality. Her weapons are made of an extremely hard wood given to her by a very wise tree. Emerald Kirby's home planet is the Grass Planet Floria. Her home on Pop Star is Beanstalk Park. Being the only female Kirby on the team, she often finds herself surrounded by some of the team's guys, who try to win over her affection. The two that hit on her, and fight over her, the most are Crispy Kirby and Ocean Kirby, although Electric-Lime Kirby and even a few helpers also have feelings for her. But the one Emerald likes the most, aside from her best friend Bio Spark, is Parasol Waddle Dee, and even, though to an extremely small extent, Extra-Crispy Kirby! Speaking of the orange Kirby, Emerald Kirby is one of the only five members of the team who don't tease him. The others are Bio Spark, Waddle Doo, Parasol Waddle Dee, and Bugzzy. Emerald Kirby thinks that the way Extra-Crispy Kirby's mind works is kind of cute. I'll explain why the others don't tease him later. Emerald Kirby rides the Swerve Star. She says it helps her Ninja skills by training in dodging at the correct time. You would probably see her wearing the crown for the new leaf ability. Her best friends are Bio Spark, Waddle Doo, and Parasol Waddle Dee.

Extra-Crispy Kirby is a burnt- & crispy-orange Kirby who is also Crispy Kirby's younger brother. He, like his elder sibling, is native to Magma Flows on Neo Star. Also like Crispy Kirby, he uses firey attacks, but only Fire and Burning attacks. He doesn't really have an Air Ride Machine. Extra-Cripsy Kirby isn't too smart. It's for this reason that most of other team members tease him. He doesn't care, however. Actually, he takes everything they say about him as compliments, which is another reason they tease him. He has an apparant obsession with the Lava Dragons in the volcanic area in the team's meeting place (which, again, bears a strong resemblence to City Trial). His obsession can be thought of as the cause of his being so "extra-crispy". One day one of the Lava Dragons came out of the lava and yawned, but it sounded more like a bellow. Extra-Crispy Kirby thought he was hungry. So he brought a chunk of hamburger over to the edge of the lava and shouted to the dragon that he had some food. Smelling the meat, the dragon dove, colliding with the Star Warrior, frying him to a well-done state. Here is yet another reason for which he is made fun of. When Crispy Kirby would finish the story of how his brother was crispified, he would say, "He's not that bright." "He was when the Lava Dragon hit him," would be the response from another Kirby. Extra-Crispy Kirby's best friends are Crispy Kirby, Parasol Waddle Dee, and the Lava Dragons (although they don't know that).

Ocean Kirby is a transluscent-aquamarine Kirby who hails from Aqua Star. He speciallizes in water-based abilities. This sparks a bit a of a rivalry between him and Crispy Kirby. That and the fact he also has a pretty big crush on Emerald Kirby. He wields a Bubble wand. He doesn't have an Air Ride Machine. Instead, Ocean Kirby gets around via a small submersible/hovercraft. He knows the oceans better than anyone! Ocean Kirby's best friends on the team are Blipper, Squishy, Parasol Waddle Dee, and (though he'll never admit it) Crispy Kirby.

Electric-Lime Kirby is a Kirby of Citrus color. He is actually native to Crash Clouds on Popstar. He is an extremely skilled technician/mechanic/chemist. It's thanks to his technical know-how that he was able to create the flying fortress that he calls home (this fortress strongly resembles level 4 of Jam Jungle in Squeak Squad). EL, as he is sometimes called, specializes in electric attacks. He is constantly sparking with energy. He unfortunately can't swim, and hates getting wet. If he does happen to get wet, his own electricity will go out of control and trap him in an electric field for a few seconds (and yes, it's as painful as it looks/sounds). His hobbies are inventing and fixing stuff. He claims to have invented grind rails, but he didn't. So don't believe him! EL rides the Turbo Star (which he also claims to have invented. Anyone else noticing a pattern here?). His best friends are Plasma Wisp, Sparky, Crispy Kirby, and, surprise surprise, Parasol Waddle Dee.

These guys are basically helpers (or wouldSHOULD-be helpers) from the games. They don't have their own Air Ride Machines, so they usually hitch a ride with one of the Kirbies on their machines.

Parasol Waddle Dee is the friendliest guy on the team. He is sensitive to others' feelings and tends to know when something's wrong with them. This trait usually makes him the first one to notice any potential imposters guising as one of the team. His trusty parasol is multifunctional. It can be a frying pan, a spear, a bo-staff, a parasol, and it can also store stuff. Dee is never seen without it. Instead of hitching a ride with a Kirby, Parasol Waddle Dee usually grabs on to Bugzzy, to whom he feels extra close, which Bugzzy suprisingly doesn't seem to mind. Dee is one of the only few team members to not make fun of Extra-Crispy Kirby. This is because he doesn't like the idea of teasing people. Parasol Waddle Dee is best friends with everybody on the team. 'Nuff said.

Bugzzy is the toughest member of the team. A serious fighter with a strong sense of honor, Bugzzy does not like to lose. He can be stuck-up sometimes and even a little rude, and he strongly dislikes any nonsense. This tends to get on Emerald Kirby's nerves. He does, however, have a caring side. If one of his teammates is threatened, he'll stop at nothing to make sure they're safe. This usually causes him to withstand the most injuries from battle, fatal ones, too. Bugzzy also is one of the only few members of the team to not tease Extra-Crispy Kirby for being so dim-witted. But Bugzzy claims this is because he does not want to waste time making fun of someone who doesn't know how to be made fun of. Bugzzy keeps a secret diary. I mean secret diary, as in he'd kill me if he knew I told you this. So PLEASE don't tell him! Since Bugzzy can fly, he doesn't need to hitch a ride, but he lets Parasol Waddle Dee grab on to him while he's flying. Bugzzy seems to feel as if he need to protect Dee from harm. Parasol Waddle Dee is probably his closest friend.

Retrieved from "https://kirby.fandom.com/wiki/User:J-Yoshi64?oldid=320392"
Community content is available under CC-BY-SA unless otherwise noted.