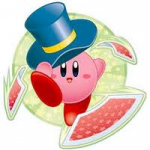 Hai. I am a huge fan of the Kirby of the stars anime. I like to compare the games with the anime. My belief is that Captain waddle doo is a rare breed of waddle doo that adapted to handling a sword. My faviourite games are : Kirby and the amazing mirror, kirby: a nightmare in dreamland and Kirby's adventure wii. I am also fond of the Golden sun games.

{C To make things clear, I like pretty much every Kirby character. Everyone except Escargon's mum... 0_o . ( I make no profit of these sprites and did not design or own any of them. ) Ok, Escargon's mum isn't that bad... But Magalor is!! he...

At Kirby wiki, I look for articles that are stubs and that need cleaning up, and I look into them.

Any notable spelling mistakes, incorrect information or any irrelevent information I try to replace. I also like to add sprites now and then.

My faviourite creepypastas are white hand ( pokemon red ) and kirby 666. I go oncreepypasta wiki a lot, so you'll find my profile. My least favourite

1 of 6
Add photo
creepypasta is Herobrines peninsula -_- . It's barely even a creepypasta!! Chainsaw waddle dee, waddle doo, copy abilites, profile pictures, fumu, Dedede and Escargoon pictures are ones I added, but all others are not mine. Rights to their respectful owners.

Note that most of this will be fan art. I would like to thank Celebimaster897 for making my new signature:

and to NerdyBoutKirby, for my latest one:

"The name is "operation floating cola on Earth!""

"Come back when you can put up a fight"

"The time has come... The time to show our power!"

Retrieved from "https://kirby.fandom.com/wiki/User:Fumutan?oldid=150491"
Community content is available under CC-BY-SA unless otherwise noted.