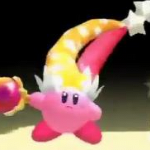 Best Kirby Game: Kirby's Return to Dream Land (got 100 percent complete on everything)

Worst Kirby Game: Kirby's Epic Yarn (It's hardly a real Kirby game! There's no Copy Abilities! So I don't even pay attention to it)

Favorite Kirby: Right Back at Ya Character: Sirica

Least Favorite Kirby: Right Back at Ya Character: Tiff

Favorite Once Use Ability: Light

Least Favorite Once Use Ability: Crash

The Alternate Story - Why Didn't You Do This Instead?!

In a lot of stories, everything HAS, absolutely HAS, to go right. Which is why I've noticed some flaws that an enemy, or Kirby himself, has has had. I'm going to list them here (this is not in any sort of order):

Retrieved from "https://kirby.fandom.com/wiki/User:Flare_Beam?oldid=194021"
Community content is available under CC-BY-SA unless otherwise noted.