This article is about the ability. For the enemy Kirby gets the ability from, see UFO (enemy).

The player loses it after one stage (except the Kirby Squeak Squad version). Transformational.

Doesn't have a hat, but he pilots a flying saucer, or maybe he becomes one.

UFO is one of Kirby's rarest copy abilities. Allowing him to pilot a flying saucer, it is a powerful and innovative ability that offers permanent levitation and (oftentimes) four different attacks. The type of attack UFO Kirby does is based on how long the player holds down B. The longer its pressed, the stronger the attack will be. Kirby is also capable of moving around while charging, too.

The ability does have quite a few downsides, however, as it is incapable of moving down through pass-through floors and ladders. Kirby is also significantly slowed down having this ability, making him a sitting duck to some of his faster foes. But perhaps its biggest weakness it its limited properties, as Kirby only has it for only a single stage (namely in Kirby's Adventure), 10 short seconds (in Kirby's Dream Course), or disappearing when entering the main hub area (in Kirby & the Amazing Mirror). This was changed in Squeak Squad, where it could be taken to any other stage, just like any other ability. However, UFO Kirby cannot go down ladders, forcing him to forfeit this power. The player can move while charging up attacks, but can't face in another direction. 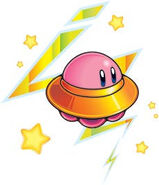 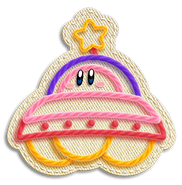 Kirby's Adventure
Add a photo to this gallery
Retrieved from "https://kirby.fandom.com/wiki/UFO?oldid=72439"
Community content is available under CC-BY-SA unless otherwise noted.