Pilots or becomes a gold flying saucer. No hat prior to Kirby: Planet Robobot, wears a gold helmet with two ear guards with stars on the front of them and two antennae.

UFO (spelled U.F.O. in Kirby's Adventure, the Kirby's Dream Course instruction booklet, Kirby: Nightmare in Dream Land, Kirby & The Amazing Mirror, and Kirby: Squeak Squad) is one of Kirby's Copy Abilities. It allows him to pilot a flying saucer. The ability first appeared in Kirby's Adventure.

UFO is a powerful ability that offers permanent levitation and four different attacks. The type of attack UFO Kirby does is based on how long the player holds down B. The longer it's pressed, the stronger the attack will be. Kirby is capable of moving around while charging, but cannot change the direction he is facing. UFO's main limitation is that Kirby cannot go back down through floors while having the ability, even with ladders.

UFO is very difficult to obtain. When it is found, either the UFO or the Copy Essence are generally in well-hidden areas. Kirby can only obtain it from UFOs in five stages in Kirby's Adventure/Kirby: Nightmare in Dream Land or through the Mix ability by inhaling two Rockys, and for 10 short seconds in Kirby's Dream Course. The ability is lost when entering the overworld area, or the Central Circle in Kirby & The Amazing Mirror. This behavior was changed in Kirby: Squeak Squad, where it could be taken to any other stage, but more often than not, Kirby has to forfeit the ability because he cannot proceed any further because of UFO's interaction with ladders and floors.

In Kirby: Squeak Squad, should the player attempt to drag a bubble item from the Copy Palette up to Kirby's mouth while in UFO form, Kirby will comically flip upside-down and drop to the ground head-first, and cannot move as long as the bubble is within his mouth until he exhales it or re-swallows it. This will also happen with Ghost Kirby, but instead he will inflate and drop onto the ground. Trying to do this over a bottomless pit spells an instant KO.

In Kirby: Planet Robobot, UFO can be accessed by using the Kirby amiibo from the Kirby amiibo series or by completing the game 100%. The ability acts much like it does in Kirby: Squeak Squad, even retaining the Trajectory Orb, though it now has a new move that allows Kirby to beam up enemies with a tractor beam. This move can be compared to a similar move Kirby performs while in Saucer form in Kirby's Epic Yarn. UFO Kirby can also now pass through soft platforms and ladders, but loses the ability to guard.

It is also one of the few abilities that may be used in the water (except in Kirby's Dream Course), along with Sword, Parasol, Hammer, Master, Metal, Spear, Bell, and Staff. However, it and Metal are the only abilities to retain their entire moveset when used underwater, unlike the other aforementioned abilities where only certain underwater variations of their attacks are usable.

In Kirby's Dream Course, the ability grants a (relatively) high degree of control over Kirby's movement, but with a 10-second limitation after it is activated. Unlike other abilities in the game, it cannot be re-activated even if Kirby does not capture another ability. After it is activated, UFO Kirby will fly forward briskly in a straight line without changing his altitude. During this time, his path can be altered at 90-degree angles by pressing left or right on the D-pad. If he touches the ground, he will hug the terrain to follow any slopes upwards. When the timer runs out, if UFO Kirby touches a bumper, or if the B button is pressed to end the ability early, UFO Kirby will "land" by descending to the ground in a straight line. If the player can reach the hole in time, this can be used to drop Kirby straight into it easily. 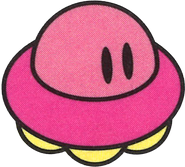 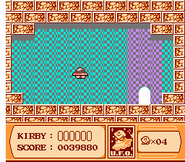