Regular Enemy
Two Face is an enemy in the Kirby series, debuting in Kirby's Dream Land. It does not give any Copy Ability when inhaled. Two Faces make their first appearance in the Castle Lololo stage.

Two Face is a brown, octagonal shaped mask with an angry visage composed to yellow eyes and a mouth with fangs. When disguised as part of the background, Two Face has a bored expression.

In Kirby Star Allies, Two Face is now ovular, colored yellow with red markings and an extra pair of fangs on the bottom lip for its angry face and pale with brown markings and a sleepy expression for its fake face.

Two Face hangs on the walls in Castle Lololo and looks harmless until Kirby gets close. It then turns around to reveal its real, angry face, and chases Kirby. As it turns around, it reveals a tied bow on its back. Its Extra Game equivalent is Mr. P. Umpkin.

Two Face reappears in Kirby Star Allies, where it acts similarly to how it did in Kirby's Dream Land.

Two Face's name comes from the fact that it has two faces, one on its front, and one on its back. It is also a reference to the term "two-faced," meaning "deceitful or hypocritical," as Two Face appears initially harmless before flipping over and chasing Kirby. 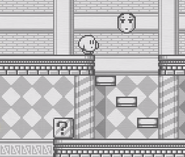 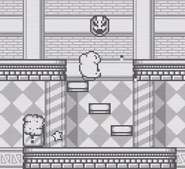