Twizzy are recurring enemies in the Kirby series that resemble baby chickens. Though they don't appear very often in the series, they were, in fact, the second enemy to be encountered in the first game of the series, Kirby's Dream Land.

Twizzy always behave the same way from game to game. They will rest somewhere nearby, then spring into the air when Kirby approaches. Some will even chase after Kirby in an attempt to fly into him, in a similar manner to Bronto Burt.

Twizzy is a baby chicken with beady black eyes and a tiny orange/yellow beak. It is covered in yellow down and has stubby wings, though this doesn't hinder its ability to fly. Twizzy also has no legs and gets about by hopping.

Twizzy first appear in this game in the Green Greens level. They mostly sit around on the ground and do a small hop when Kirby gets close, though some can be seen flying in the air in a similar fashion to Bronto Burt. In the Extra Game they are replaced by Tookey.

Twizzy return in Kirby's Adventure and are virtually unchanged from their appearance in Kirby's Dream Land, although they don't show up until late in the game. In the remake, however, they show up much earlier and are also more frequent. Some Twizzy will spring into the air when Kirby gets close and follow him for some distance - if Kirby avoids them long enough, they will lose interest and fly away.

Once Kirby reaches the Grape Garden stage in the remake, Twizzy of other colors such as pink, blue and orange start to appear.

Twizzy appears the same as it does in both Kirby's Dream Land and Kirby's Adventure. Twizzy's beak is yellow in this game, whereas it has an orange beak in Kirby: Nightmare in Dream Land. In Revenge of the King sub-game in the remake Twizzy is replaced by the crow Croucars.

Twizzy makes a brief appearance in the sub-game Kirby Brawlball, occasionally two Twizzies will fly across the screen behind a mother Tookey. This seems to suggest that Twizzy are related to Tookey.

This time, Twizzy's appearance has been subtly changed. It has orange down rather than yellow and they have lighter beaks.

While Twizzy does not appear directly in this game, the Top Ride item Chickie may be considered a cameo. Chickie resembles a Twizzy with X shaped eyes and causes opposing racers to become dizzy when picked up by the player.

Twizzy appears as one of the paintings drawn by Paint Roller in the Paint Panic sub-game.

Kirby's Dream Land
Add a photo to this gallery 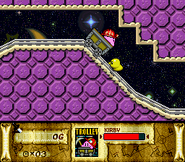 Retrieved from "https://kirby.fandom.com/wiki/Twizzy?oldid=180142"
Community content is available under CC-BY-SA unless otherwise noted.