Treasure Chests are boxes containing various items. They have appeared in a multitude of games.

They are usually depicted as being red or brown boxes with a gold trim.

In the sub-game The Great Cave Offensive, players are encouraged to collect Treasure Chests that contain items. The player doesn't need to get all of them. There are 60 different chests in both games. These treasures do nothing but serve as incentives for 100% completion. Many treasures are references to other Kirby games or other Nintendo games (such as the Triforce). Each treasure has a different "gold" value. Some are easy to get, while others are harder.

In Kirby Tilt 'n' Tumble, Treasure Chests are occasionally found in levels. When opened, a roulette of six items (often including a Maxim Tomato, cake, hamburger, Power Drink, 1UP, 2UP, or 3UP) will appear. One of these items will be given to Kirby. Treasure Chests appear right before a boss fight.

In Kirby & The Amazing Mirror, treasure hunting is a prominent feature of the game. However, this game expanded on the system used in Kirby Super Star, some items can be used by Kirby in-game, such as Spray Paint. Other chests are needed to complete the game fully, holding items like the World Map and Area Maps, and some are optional, containing items like food and features for the Sound Player.

In Kirby: Squeak Squad, treasure hunting gains a new catch: Kirby must collect the treasures in his stomach and go to the goal door to open them. There are two types of chests: small red ones and big blue and gold ones.

Squeak Squad members will appear whenever there is a blue Treasure Chest. Sometimes, the chest is just there and the Squeak will appear after Kirby picks it up. Other times, they will be in a predetermined location and appear when Kirby gets there. Occasionally, a Squeaker will be seen hopping with a chest, and Kirby must get it from the Squeaker. When the Squeak appears, the Squeak Squad theme will begin playing. They will go towards it and try to grab it to take it to a hideout. To make sure Kirby gets the chest, he must fight them until they get knocked out, and then take it, or if he gets to it first, then he can run away to a door and go through, but sometimes the Squeak may reappear later in the level. If Kirby is damaged by a Squeak, he will drop one of his Treasure Chests and the Squeak may grab it. If a Squeak takes it to a hideout, Kirby must hurry before they bar up the entrance door. On another note, a special kind of Waddle Dee known as the Gold Waddle Dee carry Treasure Chests. They run around fast- and Kirby must inhale or defeat it before it runs off a cliff in order to get the chest.

If Kirby neglects a Treasure Chest or fails to obtain one, he must replay the stage to get it.

In Kirby: Squeak Squad, some of the same basic treasures from Kirby & The Amazing Mirror return, along with some new ones, such as Ability Scrolls, Ghost Medal pieces, Copy Palette styles, keys to unlock secret stages, jigsaw puzzle pieces, and pieces of a map to find a secret place where Kirby can access all the abilities he has unlocked. Most of them are just for fun, but some treasures are actually mandatory -- when Kirby defeats a boss for the first time, a chest will appear that give items called Boss Battle Badges. In levels 2-6, there are certain items in Treasure Chests called Star Seals. There is one in every level and they are always in big Treasure Chests; the radiation from the Star Seal causes the chest to glow, thus making it easier to spot. Kirby must obtain all the seals and finish Ice Island to use the Star Seals and grant access to Secret Sea, the area where Meta Knight's ship, the Halberd, crashed long ago. The only treasure that isn't gotten from a Treasure Chest is the Strawberry Shortcake, which is gotten automatically after the game is beaten.

There are three chest-shaped patches in almost every non-boss level. The ones where they don't usually appear is the transformation levels. Instead, the treasures are found floating in the air. Kirby and Prince Fluff can open these using a yarn whip. The furniture inside each must be collected for a 100% completion rating.

Treasure Chests make an appearance in Kirby Mass Attack, and this time a key is needed to open them. Also, a variation of the chest, the skull chest, can be found by collecting a skull key. The skull chest is carried by a red Skully. Both kinds of chests predominantly contain Medals.

An unused blue Treasure Chest greatly resembling those in Kirby: Squeak Squad exist in the game's memory. A blue flash appears behind the sprite, as if indicating that the chest contains a Star Seal.[1]

Treasure Chests can be opened by tapping ↑ on the +Control Pad or Circle Pad when Kirby is standing in front of one.

In Kirby: Planet Robobot, certain Treasure Chests are merely holograms. Kirby finds one of these if he takes a wrong turn in research facilities.

Blue Treasure Chests from Kirby: Squeak Squad reappear as a part of the Daroach Dream Friend's moveset. When summoned, they may be carried and thrown for a short period. When it touches an enemy, a fake Dark Nebula will spring out.

Treasure Chests are now opened by pressing A when near one. Treasure Chests containing a Captured Waddle Dee will shake periodically in hopes of someone saving them.

In Super Smash Bros. Brawl, a big blue treasure chest appears as a sticker featuring its artwork from Kirby: Squeak Squad. When applied by anyone, the chances of obtaining a trophy when defeating an enemy in the Subspace Emissary increases by 16. 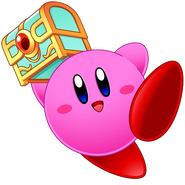 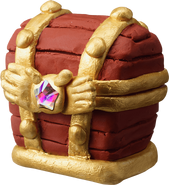 Kirby and the Rainbow Curse (winged)