Tookey (called Cluck in Kirby's Pinball Land) is a chicken-like enemy found in the Kirby series. It is often featured alongside the chick enemy Twizzy, which seems to imply that Tookey is a grown-up Twizzy or otherwise related.

Tookey resembles a chicken with white feathers, a yellow beak, and a red wattle and comb; but has no feet (or at least no visible ones).

Tookey first appears as a replacement for Twizzy in Kirby's Dream Land’s Extra Game. Tookey behaves similarly to Twizzy, with the exception that Tookey is often faster, does two vitality of damage instead of one, and homes in on Kirby more often. The ones that rest on the ground fly in a half circle pattern surprising anyone that expects Twizzy's weak hop.

In Kirby Super Star/Kirby Super Star Ultra, Tookeys are often found in the same area as Twizzys, instead of replacing them. In this game, their attack pattern is much less aggressive than in Kirby's Dream Land. Additionally, in the sub-game Revenge of the King, Tookeys are replaced with Cawcun, a pelican-like foe.

Tookey makes a small cameo in Kirby Brawlball where they will sometimes fly around the stage followed by two Twizzys. They will give points to Kirby if he hits them. The fact that Tookey is accompanied by the Twizzys hints that they are younger counterparts of Tookey.

Tookey's name is a corruption of turkey, a bird animal. Despite this, Tookey resembles a chicken rather than a turkey. 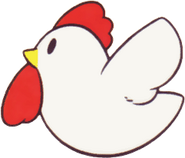 Kirby 25th annniversary artwork
Add a photo to this gallery 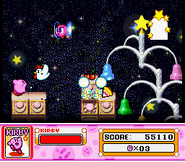 Kirby Mass Attack
Add a photo to this gallery
Retrieved from "https://kirby.fandom.com/wiki/Tookey?oldid=321421"
Community content is available under CC-BY-SA unless otherwise noted.