Togezo is an enemy in the Kirby series, debuting in Kirby's Adventure. It provides the Needle ability when inhaled.

Togezo is a turtle-like black creature with red eyes (yellow in-game) and a large, red shell with yellow spikes on top of it. Its feet are red.

Togezo will curl up into a ball for defense in certain intervals. In this game and this game only, Togezo will also roll around vigorously in an attempt to impale Kirby with its spiked shell.

In this game's remake, Kirby: Nightmare in Dream Land, Togezo was replaced by Needlous, who retained all of Togezo's attacks but as different in appearance. The reasons for this change is to avoid regulations with the Mario universe, as "Togezo" means "Spiny".

Togezo appears as an enemy in Kirby's Dream Course. Unlike previously, Togezo will just stand still without doing its roll attack.

Togezo's latest appearance is in Kirby's Dream Land 3, where he retains his appearance (with some coloration changes), but not all of his forms of attack. Togezo does not roll around vigorously in this game. 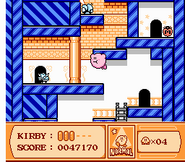