Togeira is a Demon Beast that King Dedede ordered one evening in the episode Sweet & Sour Puss. Togeira's power comes from the anger of the people around him. Instead of listening to the king's orders, Togeira simply attacks the king and steals his ability to get angry or fight back, as Customer Service puts it. Dedede is actually forced to show Kirby some kindness for a change while eating some of Kawasaki's most disgusting food- steamed rice with a lot of chocolate gravy. The king undergoes quite some pain and punishment, but because he's under Togeira's influence, he is unable to fight back. Togeira simply manifests in Dedede's body until boiling mad. When Togeira's stored anger is at full capacity, Dedede screams and gets angry as Togeria goes to work and controls the king. Dedede is blinded by Togeira's intense rage and goes on a rampage attacking Kirby. Dedede comically trips on a banana peel and Togeira falls out of the king's head. Now outside of the King, Togeira begins to launch hundreds of spikes at Kirby. Kirby inhales some of Togeira's spikes and becomes Needle Kirby. Kirby fires needles at the monster but they just aren't powerful enough to do any damage. Togiera launches several spikes which follow Kirby like guided missiles. With the Warp Star, Kirby guides Togeira's spikes to his head. The spikes get lodged in his body and Togeira reaches his boiling point. Togeira, who is now insanely mad and malfunctioning, self-destructs, which in turn completely destroys him.

Togeira is a mechanical, sea urchin-like monster. His purple body is covered in spikes much like Togezo and Gordo. He has flat gold eyes and is always seen emitting steam when angry. His face shows that his body cavity is filled with swirling red liquid (perhaps mercury). Not only does his face resemble a thermometer, but the thin line running across his face acts as a meter to measure the rage that is currently built up inside him. He even makes growling sounds. 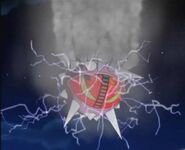 Togeira about to explode.
Add a photo to this gallery
Retrieved from "https://kirby.fandom.com/wiki/Togeira?oldid=220413"
Community content is available under CC-BY-SA unless otherwise noted.