Spear Waddle Dees
Tiny Town is a stage appearing in Kirby: Canvas Curse. It is Reddy Land's second stage. It is the second stage in the game, coming after Plant Plain and before Ravine Road.

Tiny Town is an immense constructed utopia that came about when Drawcia turned Dream Land into a world of paint. Tiny Town is a toy-like city that is made inside a large dome with clouds painted on it. There are also small holes in the dome that shows the real sky outside. Kirby travels through many glass, tube-like tunnels that transport him from building to building. Kirby must navigate through tons of these small "buildings" in this colorful, pocket-sized paradise.

The first part of this stage has Kirby going from room to room from the tubes. It is very simple and linear. The second part introduces Kirby to the first cannon puzzle, where the Magical Paintbrush has to be activated at the right time to launch Kirby at the correct catapult. After that, he arrives at a fork. If Kirby picks the east tube, he can obtain a 1UP, then he go back to the room he was in by another tube. Once Kirby goes to the left, he can follow the path and grab the Beam ability once he can get it. After grabbing it and going through the tube, he faces a Room Guarder, which are a few Spear Waddle Dees. After the battle, a cannon appears. Once he jumps into it and launches himself, the door is right to the left. If he goes to the right, there's a medal, but he needs to have pressed the orange switch in Rift Ruin, much later in the game, to have access to it. The third part is immensely simple; Kirby just needs to follow the trails of stars.

It is comparable to Palleto Polis.

When played with the Old School music option on, Tiny Town's theme changes to Grape Garden's theme from Kirby: Nightmare in Dream Land. 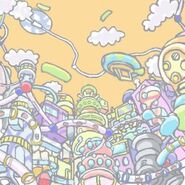 A bright and sunny day in Tiny Town.