Regular enemy
Tincells are rare enemies that only appear during boss fights with Sweet Stuff in Kirby's Dream Land 2 and 3.

Tincells are yellow starfish with five limbs and one eye in the center of their body.

Tincells make their first appearance in this game; they only appear in the boss fight with Sweet Stuff. Tincells can be fired back at Sweet Stuff by deflecting them with Water Gun or shooting them back with a Star Spit (if Kirby is paired with Kine).

Tincells reappear in this game, again alongside Sweet Stuff. In this Sweet Stuff and Tincells are paintings drawn by Ado. Kirby can inhale them and spit their bodies out as projectiles to damage and destroy the Sweet Stuff painting.

Tincell's name may be a pun on the word tinsel, an object put on a Christmas tree for decoration that sometimes contains small stars. 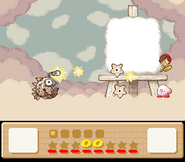