Tick Tock Jr. is a character appearing only in the Japanese puzzle game Kirby Super Star Stacker. He is a minor character and is associated only with the game's Time Trial mode.

Tick Tock Jr. is the representative of the Time Trial mode of play. When the player selects Time Trial, Kirby is faced with a seemingly-endless puzzle of blocks. The gameplay is identical to the regular game mode puzzles, however, it is ongoing and the match only ends after three minutes pass. After which Kirby's score is tabulated.

Throughout the match, Tick Tock Jr. serves as the opponent. He routinely adds in rows of new puzzle blocks as the match goes on.

Tick Tock Jr. is a small blue alarm clock. As his name implies, he appears to be a miniature version of Mr. Tick Tock. His facial features imply he is laid back in personality, but he appears quite competitive when Kirby squares off against him. 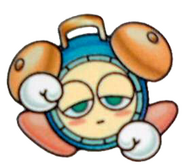 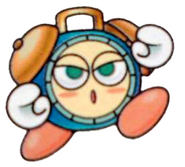 Kirby Super Star Stacker
Add a photo to this gallery
Retrieved from "https://kirby.fandom.com/wiki/Tick-Tock_Jr.?oldid=149604"
Community content is available under CC-BY-SA unless otherwise noted.